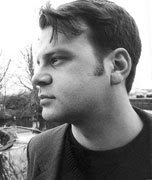 Paul Perry was born in Dublin in 1972. He has won the Hennessy New Irish Writer of the Year Award and The Listowel Prize for Poetry and has been a James Michener Fellow of Creative Writing at The University of Miami, and a Cambor Fellow of Poetry at The University of Houston. His work has appeared in numerous publications, including Poetry Ireland Review, Cyphers, TLS, Granta and The Best American Poetry 2000. He has been a Writer in Residence for Co. Longford, the University of Ulster, and Rathlin Island. His first book The Drowning of the Saints was published by Salmon Poetry in 2003 to critical acclaim.

The winner of this month's Slam goes forward to
the 2008 North Beach Poetry Nights' Grand Slam in December.
The prize for the Grand Slam winner is publication of a collection of her/his work.

We look forward to seeing you upstairs at Richardsons!
Admission 5 Euro.