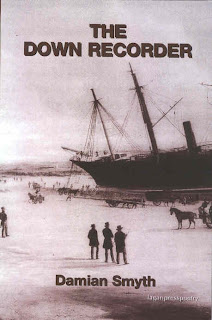 Damian Smyth was born in Downpatrick, County Down in 1962. His first collection of poems Downpatrick Races (Lagan Press) appeared in 2000. His stage play, Soldiers of the Queen, played the Belfast Festival at Queen’s in 2002, followed by his acclaimed second collection of poems The Down Recorder (Lagan Press) in 2004. His work appears in The Ulster Anthology (2006) and The Blackbird’s Nest (2007).

Susan Lindsay was born in Dublin but now lives in Galway. She has attended poetry classes at Galway Arts Centre, and read her poems at the Over the Edge: Open Readings, the Baffle Festival, the Cuirt Poetry Slam and North Beach Poetry Nights. In December 2005 Susan won the RTE Carol of Our Times competition, and her work was put to music by the RTE Concert Orchestra. She was recently shortlisted for the Valentines Day Sonnet Competition sponsored by Tig Neactains’.

Frank Golden was born in Dublin and has been living in the Burren, County Clare, for almost twenty years. He has published four collections of poetry. In recent years he has worked on TV andand his novel The Two Women Of Aganatz, film projects and has had a number of solo exhibitions of his paintings. Frank’s most recent collection of poems, In Daily Accord, is just out from Salmon.

Alan McMonagle is originally from Longford but now lives in Galway City. He writes both fiction and poetry. His work has appeared in Southword, The Cúirt Annual, west47online and Crannóg. He took second place in the 2006 Sean O'Faolain short story competition and was also short-listed for the Fish Short Story award. He recently completed an MA in Writing at NUI Galway. His fiction was selected for inclusion in last year’s Windows anthology for emerging writers.

Tom Morgan was born in Belfast in 1943. He has published four books of poetry to date: The Rat-Diviner by Beaver Row Press, Nan of the Falls Road Curfew by Beaver Row Press, In Queen Mary’s Gardens by Salmon Publishing and Ballintrillick in the Light of Ben Whiskin by Lagan Press. Nan was nominated for The Irish Times/Aer Lingus literary awards. He lives in Belfast and Ballintrillick, Co Sligo.

There is no entrance fee. All are welcome. For further information contact 087-6431748.

Over The Edge acknowledges the financial support of the Arts Council and Galway City Council.
Over The Edge Literary Events at 6:09 PM
‹
›
Home
View web version