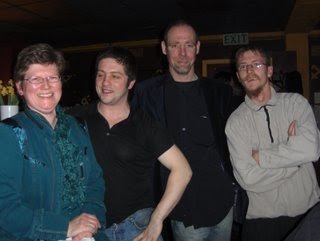 Boarding Cards, Homeland Security and the Gay Capital of England

Having won the 2007 Cúirt Poetry Grand Slam last April, with my poem Day Tripping in Amsterdam, I was all set, five months later, for Slovenia. I shared a seat on a bus, from the airport, with the American poet, Carolyn Forché. She told me she attended the second Cúirt Festival, when I was only seven and poetry not in my vocabulary.

Poets, writers, playwrights, translators and a partridge in a pear tree...every time we sat for breakfast, dinner or met for a cigarette outside, it was an observational poets’ wet dream: people from France, Italy & Switzerland talking German. Other nationalities waving the flag of broken English as they discussed dead Russian poets, living Swedish novelists, translation and comparative programmes run by Polish universities. Then, there was me: Michael Schmidt’s interloping grey squirrel with feck all coupla focal. It was an eye-opening experience to attend this festival for me. I met other Irish poets there such as Denis O’Driscoll, Cathal Ó Searcaigh, Celia de Fréine and Gabriel Rosenstock.

In December I flew to the other side of the globe: Chicago. Having filled out my Homeland Security form declaring I was not a terrorist, I landed in O’Hare. Snow everywhere; I’d never seen as much. A joy to me– but a pain in the arse I was told by everyone. One of my readings was in the Green Mill, birthplace of Slam Poetry, but once a famous speakeasy from back when Al Capone wrote the poetry. I also read at the Irish American Heritage Centre where I had a poem taken to appear in the Irish American News.

The previous year I had won the Cuisle Poetry Slam in Limerick and in October 2007, travelled with the Whitehouse Poets’ from Limerick to read at the Pulse Festival in sunny Brighton –an enriching experience and I made some good contact there.

Poetry has brought me around the world, but home is where it started: a Sunday in Autumn I wrote my first poem and haven’t stopped since. A sparkly diamond was once a dirty lump of coal. I kept chipping away for about four years until I had amassed a masterpiece manuscript and every one of them 24 carat. Every editor told me, each in his or her polite enough way, that it was toilet-paper.

A friend suggested I should take a creative writing class; where I learnt of the Over The Edge readings in the library and at Sheridan’s wine-bar – run by Kevin Higgins and Susan Millar DuMars. I attended my first poetry slam in November ’05, North Beach Poetry Nights organised by John Walsh. A month later I went to my first Galway Arts Centre poetry slam. It’s scary. At first you don’t know anybody; but that changes.

For all those poets just starting off: my only advice is, in no particular order– Read. Write. Workshop. Slam. And submit. Sure, rejections a bitch; but without the sour the sweet just isn’t sweet.

Micéal Kearney lives in Balindereen, County Galway. Since he took a creative writing class at Galway-Mayo Institute of Technology in September 2005 his work has appeared in The Shop, Orbis and elsewhere. He won the 2006 Cuisle Poetry Slam in Limerick, the 2008 BAFFLE competition; the 2008 Cúirt International Festival of Literature Poetry Grand Slam & The 2008 North Beach Poetry Nights Grand Slam. He was also shortlisted for the 2007 Cinnamon Press Poetry Prize. His first collection of poems will be published soon.
Over The Edge Literary Events at 11:18 AM
‹
›
Home
View web version