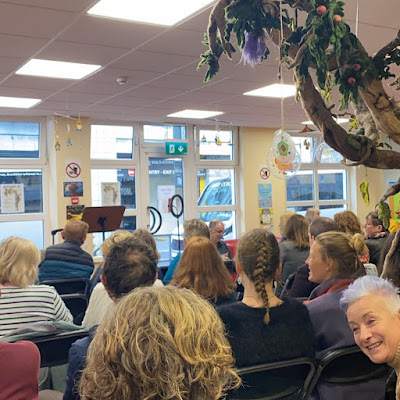 This is Over The Edge’s annual non-fiction special, at which all of the Featured Readers are writers of non-fiction; however poets and fiction writers are still very welcome at the open-mic. The October ‘Over The Edge: Open Reading’ takes place in Galway City Library on Thursday, October 27th, 6pm-7.30pm. The Featured Readers are Rob Doyle, Riley Johnston, & Tony Greenstein. There will as usual be an open-mic after the Featured Readers have finished. New readers are always especially welcome at the open-mic. People outside Galway can join the reading via Zoom. We hope that those who wish to will be able to read remotely at the open-mic via Zoom. The technology is a work in progress, so we ask that potential open-mic readers bear with us.

For those of you attending via Zoom:  Over The Edge is inviting you to the August Over The Edge: Open Reading on Zoom. Thursday, October 27th, 6pm-7.30pm

The reading will also be broadcast live via Over The Edge’s Facebook page https://www.facebook.com/profile.php?id=100070193895521

Tony Greenstein is the son of an Orthodox Jewish Rabbi, an anti-Zionist and a founding member of Britain’s Palestine Solidarity Campaign and Jews for Boycotting Israeli Goods. He is also a long-standing anti-fascist activist and author of A History of Fighting Fascism in Brighton and the South Coast. Tony has written for many publications and websites including the Guardian, Brighton Argus, Brighton and Hove Independent,Tribune, Labour Briefing, the Journal of Holy Land Studies,Weekly Worker, Middle East International, Al Jazeera, Middle East Monitor, Mondoweiss and Electronic Intifada. He has also contributed to Hodder & Stoughton’s The Essentials of Philosophy & Ethics among many  other books.  A well known blogger (http://www.tonygreenstein.com), Tony was the first (though not last) Jewish person to be expelled from the Labour Party in February 2018 as part the campaign by the Zionists and Labour Right..

Riley Johnston teaches English in St Genevieve’s High School, Belfast. She was first published in THE 32: AN ANTHOLOGY OF WORKING-CLASS VOICESand later with a short story in German Anthology, IRELAND: AN INVITATION.Riley’s novel A HOLY SHOW was long-listed in the 2021 Discoveries Prize and recently she was first runner up in the 2022 Mairtín Crawford Short Story Award with a story entitled, CALLOUSED.

Rob Doyle is the author of four internationally acclaimed books: Autobibliography, Threshold, This Is the Ritual, and Here Are the Young Men, which has been adapted for film. His work has been translated into several languages. His writing has appeared in the New York Times, Observer, Dublin Review and many other publications, and he edited the anthologies The Other Irish Tradition and In This Skull Hotel Where I Never Sleep.

As usual there will be an open-mic after the Featured Readers have finished. New readers are always particularly welcome. The MC for the evening will be Susan Millar DuMars. Those interested in reading at the open-mic should give their names to Kevin Higgins at Galway City Library before the reading starts at 6pm. Those who wish to read remotely should text 087-6431748 in the half hour before the reading starts; if you are texting from outside the Republic of Ireland please add the international code and knock off the first zero on the number.

Over The Edge Literary Events at 12:03 AM
‹
›
Home
View web version