October Over The Edge: Open Reading with Michael Clifford, Grace Dyas, & John Flynn PLUS the announcement of the winners of the 2018 Over The Edge New Writer of the Year

The October ‘Over The Edge: Open Reading’ takes place in Galway City Library on Thursday, October 25th, 6.30-8.00pm. This is Over The Edge’s annual non-fiction special, at which all of the Featured Readers are writers of non-fiction; however poets and fiction writers are still welcome at the open-mic. The Featured Readers are John Flynn,  Grace Dyas, & Michael Clifford. There will as usual be an open-mic after the Featured Readers have finished.  The evening will also see the announcement of the winners in this year’s Over The Edge New Writer of The Year competition, which received a large number of entries again this year. This year’s competition judge is Rachel Coventry. The shortlist can be read here.

John Flynn grew up in Dublin, going to a number of schools before entering UCD and graduating in Medicine. He taught anatomy in UCD for one year and then trained as a General Surgeon. He worked for over thirty years as general Surgeon with special interest in Urology and Paediatric Surgery in Portiuncula Hospital, Ballinasloe.  John published a number of clinical papers and has continued with Postgraduate Surgical Training in RCSI since retirement. John enjoys reading, mainly non-fiction now.  He was enrolled in a writing course by daughter Niamh.

Grace Dyas is an acclaimed artist, activist, writer, theatre director and actor living and working in inner-city Dublin, she makes theatre, film and large-scale participation projects because she wants to change the world – and to change the world you must change power. She collaborates through performance with young people and vulnerable adults. She is a member of THEATREclub. In 2017, she was the first woman to share her experience of abuse of power in the theatre world in Ireland, contributing to the global #MeToo movement. Her post to her blog opened the gate for others who followed from the theatre family, and then from across Irish public life. This became an ongoing campaign, I Believe You Before You Open Your Mouth, named for the words of Grace’s mentor, Christine Buckley (director of the Aislinn group for survivors of Industrial Schools.) Grace explored the legacies of these institutions in her play, We Don’t Know What’s Buried Here. Grace creates durational art campaigns to coincide with important social moments. For the centenary of 1916, Grace co-authored Its Not Over with Barry O’Connor, a campaign to posit the reality that the conflict in the North of Ireland is unresolved. For the abortion referendum, she toured across Ireland to small towns and cities with Not At Home – an archive of women’s experiences of travelling for abortion which she co-authored with Emma Fraser. In 2010, she won the Spirit of The Fringe award for her play Heroin. Over the past 8 years Heroin has toured all over Europe; she is currently touring a new version of the play.
Michael Clifford is Special Correspondent for the Irish Examiner. He has been working in print and broadcast journalism for over twenty years. He is the author of three non-fiction books, including Bertie Ahern and the Drumcondra Mafia (with Shane Coleman) and two crime novels. In 2014, TV3's Tonight with Vincent Browne programme selected him as Journalist of the Year for his coverage of the Garda whistleblower story. He was named the newspaper industry's Journalist of the Year in 2016. His most recent book A Force for Justice: The Maurice McCabe Story was published by Hachette Books Ireland in 2017. Michael Clifford lives in Dublin. @mickcliff 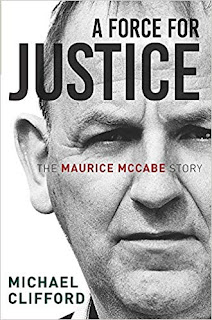 As usual there will be an open-mic after the Featured Readers have finished. New readers are always especially welcome. The MC for the evening will be Susan Millar DuMars. For further details phone 087-6431748.

Over The Edge acknowledges the ongoing generous financial support of Galway City Council, Poetry Ireland, & The Arts Council.
Over The Edge Literary Events at 6:51 AM
‹
›
Home
View web version