The February ‘Over The Edge: Open Reading’ takes place in Galway City Library on Thursday, February 26th, 6.30-8.00pm. The Featured Readers are Julian Gough, Erin Fornoff & Christine Valters Paintner. There will as usual be an open-mic after the Featured Readers have finished. New readers are especially welcome. 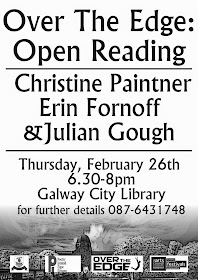 Christine Valters Paintner is the online Abbess of a virtual monastery called Abbey of the Arts leading retreats and pilgrimages with her husband John of twenty years. She is the author of eight nonfiction books on spirituality and creativity including The Artist's Rule: Nurturing Your Creative Soul with Monastic Wisdom. Christine is an American living in Galway, where she actually adores winter and the rain, never tires of finding more monastic ruins, and has found Ireland to be a wondrous poetic muse.

Appalachian born, Dublin-based poet Erin Fornoff has performed her poetry at Glastonbury, Electric Picnic, and dozens of other festivals and events across the UK and Ireland. In 2013 she was featured at Farmleigh House' "New Voices' alongside Hozier, came in third at the Strokestown Poetry Awards, and won the StAnza Slam. She has been published in The Stinging Fly, Skylight 47, New Planet Cabaret, Cyphers, and many others. In 2014 she was selected for the 2014 Poetry Ireland Introductions Series and became Artistic Director for Lingo, Ireland's first ever spoken word festival. In the coming months she will open for Hollie McNish on her Ireland tour. She is working on a novel.

Julian Gough is an award winning author who first shot to fame in the 1980s when, as a student at University College Galway, he was leader singer and lyricist with alternative rockband Toasted Heretic. He won the BBC National Short Story Award in 2007 and his The iHole was shortlisted for the one-off BBC International Short Story Award in 2012. He has also been shortlisted, twice, for the Everyman Bollinger Wodehouse Prize for comic fiction. He represented Ireland in Best European Fiction 2010; won a Pushcart Prize in the US in 2011; and represented Britain in Best British Short Stories 2012. He is the author of three novels, Juno & Juliet, Jude in Ireland, and Jude in London; two radio plays, The Great Hargeisa Goat Bubble, and The Great Squanderland Roof; and a poetry collection, Free Sex Chocolate. In 2011, he wrote the ending to Time Magazine’s computer game of the year, Minecraft. In July 2013 his Kindle Single CRASH! went to number one in the UK Kindle Single chart in the week of its release. London born and Irish raised, Julian now lives in Berlin.
As usual there will be an open-mic after the Featured Readers have finished. New readers are always most welcome at the open-mic. The MC for the evening will be Susan Millar DuMars. For further details phone 087-6431748.