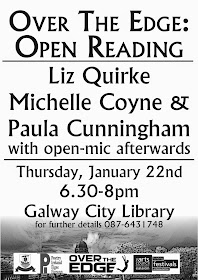 Paula Cunningham was born in Omagh and lives in Belfast where she works as a dentist. Her chapbook A Dog called Chance was a winner in The Poetry Business Competition in 1999.   She has also written drama and short fiction.  Her first full-length poetry collection Heimlich's Manoeuvre, Smith/Doorstop 2013, was shortlisted for the Fenton-Aldeburgh, Seamus Heaney Centre, and Strong Shine First Collection Prizes.


Michelle Coyne has been writing intermittently since she learned to pick up a pencil, but began in earnest in January 2012. She lives in Galway with her husband and two small boys, and works with computer software for pay during the week, the commute providing ample time for working out sticky plot points. Last year, after the birth of her second son, Michelle enrolled in Susan’s intermediate writing class, and is currently taking the advanced class to help hammer her debut novel into shape.  Michelle has had short stories published in Ropes, Crannóg, wordlegs and Silver Apples, and was Long listed for the 2014 Over the Edge New Writer of the Year Award.


Liz Quirke lives in Spiddal, Co Galway with her partner and daughter. Her poems have been published in Southword, The Stony Thursday Book, The Galway Review, Boyne Berries, Revival Literary Journal, Skylight 47 and The Poetry Bus. She has been both shortlisted and longlisted in the Over The Edge New Writer of the Year Competition in 2012 and 2014 respectively. She won the 2012 Edmund Spenser Poetry Competition at the Doneraile Literary and Arts Festival. One of her poems was nominated for consideration for the 2014 Forward Prize for Best Single Poem.