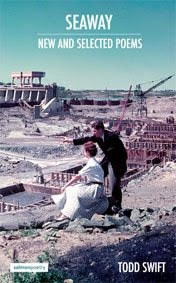 Over The Edge and Salmon Poetry present the launch of Seaway: New and Selected Poems by Todd Swift & Poetry: Reading It, Writing It, Publishing It (Edited by Jessie Lendennie) plus readings by Patrick Chapman, Edward Boyne & Megan Buckley at Sheridan’s Wine Bar, 14-16 Church Yard Street, Galway on Friday, March 13th, 8pm.
Todd Swift is one of the leading Canadian poets and poetry activists of his generation. The collection of essays about Anglo-Quebec poetry, Language Acts (which he co-edited with Jason Camlot), was a finalist for the 2007 Gabrielle Roy Prize. He has had four previous collections of poems published by DC Books in Montreal, Canada. He lives in London, England, with his Irish wife, where he works as a lecturer in creative writing, editor, and writer. SEAWAY: NEW AND SELECTED POEMS, with an introduction by Kevin Higgins, gathers together 80 poems and is the first full retrospective of a poetry career that spans over two decades.
POETRY: READING IT, WRITING IT, PUBLISHING IT is edited and compiled by Salmon Poetry managing editor Jessie Lendennie and offers frank and carefully considered information for poets, and others who are interested in knowing more about how the poetry world “works”. As well as exploring basic tenets for aspiring writers, the book contains personal essays by Irish, British, US, Canadian and Australian poets and publishers: Rita Ann Higgins, James Harrold, J.P Dancing Bear, Celia de Fréine, Michael Heffernan, Kevin Higgins, Seamus Cashman, Nessa O’Mahony, Maurice Harmon, Joan McBreen, Lex Runciman, Joseph Woods, Eamonn Wall, Susan Millar DuMars, Emily Wall, John Hildebidle, Caroline Lynch, Jean O’Brien, Chris Mansell, Gabriel Fitzmaurice, John FitzGerald, Noel King, Philip Fried, Todd Swift, Primrose Dzenga, Simmons B. Buntin, Janice Fitzpatrick-Simmons, David Gardiner, Anne Fitzgerald and Stephanie McKenzie.
Edward Boyne is a poet and fiction writer. He has had rare distinction of being short-listed for The Sunday Tribune Hennessy Awards For New Irish Writing in both poetry and fiction and for the Francis McManus short story competition. His work has been published in a wide variety of journals and anthologies. He was selected to read at the inaugural Cuirt Festival/Over The Edge showcase reading in April 2006. He lives in Galway and is a member of the Writers’ Keep group.

Patrick Chapman is a poet, fiction-writer and screenwriter. His poetry collections are Jazztown, (Raven Arts Press, 1991), The New Pornography (Salmon, 1996), Breaking Hearts and Traffic Lights (Salmon, 2007) and A Shopping Mall on Mars (BlazeVOX, 2008). His fifth collection will appear from Salmon in 2010. He has also written a collection of stories, The Wow Signal (Bluechrome, 2007); Burning the Bed (2003), a multi-award-winning film starring Gina McKee and Aidan Gillen; and an audio play, Doctor Who: Fear of the Daleks (Big Finish, 2007). He won first prize for a story in the 2003 Cinescape Genre Literary Awards in Los Angeles. He lives in Dublin.

Megan Buckley presented her work at the Over The Edge Showcase at the Cúirt International Festival of Literature in April 2008. Her poems have been published in the US, the UK, and Ireland, in publications such as The Ledge (US), The Pedestal (US), eclectica.org (US); the 'Dazzle and Attract' Project in Newcastle-on-Tyne, UK, in which one of her poems was projected onto the wall of a building (UK); Crannog (IRL), and others. She was shortlisted for the Over The Edge Writer of the Year Award in 2007 and 2008. Megan is a Doctoral Teaching Fellow in the English Department at NUI, Galway, where she is a PhD candidate and teaches seminars on nineteenth-century poetry by women.

There is no entrance fee. All are welcome. For further information contact 087-6431748.

Over The Edge acknowledges the ongoing generous financial support of the Arts Council and Galway City Council.

http://www.salmonpoetry.com
Over The Edge Literary Events at 1:07 AM
‹
›
Home
View web version