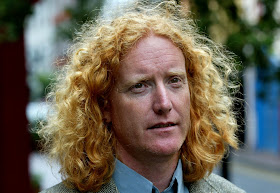 Born in Cork in 1961, Louis de Paor has been involved with the contemporary renaissance of poetry in Irish since 1980 when he was first published in the poetry journal Innti which he subsequently edited for a time. A four times winner of the Seán Ó Ríordáin/Oireachtas Award, the premier award for a new collection of poems in Irish, he lived in Australia from 1987 to 1996. He is the recipient of the Lawrence O’Shaughnessy Award 2000, the first poet in Irish to achieve that distinction. A bilingual collection Ag greadadh bas sa reilig/Clapping in the cemetery was published by Cló Iar-Chonnachta in November 2005 and reprinted in March 2006. His latest collection is Cúpla Siamach an Ama (The Siamese Twins of Time) published by Coiscéim in December 2006. A second bilingual volume agus rud eile de/and another thing will be published in 2009.

Poets wishing to take part in the 2-Round Slam please bring along two three-minute poems, preferably memorized. The winner of each month's Slam goes forward to the 2009 North Beach Poetry Nights' Grand Slam in December 2009. The prize for the Grand Slam winner is publication of a collection of her/his work.


We look forward to seeing you at The Crane Bar on Monday March 23rd. Admission 5/ 3 Euro.