The June Over The Edge Writers’ Gathering takes place on Zoom on Friday, June 25th at 8.00pm (local Galway Irish time). The event celebrates two prominent international poetry anthologies which have emerged from the Black Lives Matter movement in both the United States of America and Britain. There will be readings of poems from both anthologies and a discussion of the events which brought these important additions to the poetry canon into being. 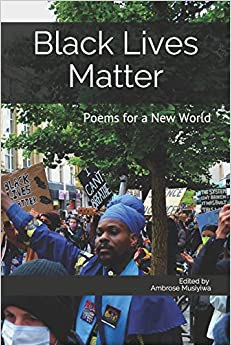 Black Lives Matter: Poems for a New World is edited by Ambrose Musiyiwa and was published by Civic Leicester U.K in 2021. It presents 107 poems from writers around the world on the theme, "Black Lives Matter." The poems reflect how, around the world, people are rallying against the killing of Black people by the police and against racism, racialised inequality, discrimination, violence and oppression. The anthology encourages the reader to imagine and work towards a world where Black Lives Matter. CivicLeicester is an indy publisher that uses events, video, photography, social media, print and digital media to highlight conversations. Published books include Black Lives Matter: Poems for a New World and Per terra e per mare: Poesie per chi è in cerca di rifugio (translated by Pietro Deandrea). 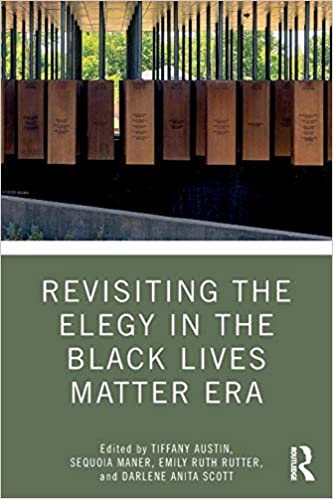 Revisiting the Elegy in the Black Lives Matter Era (Routledge, 2020) is an edited collection of critical essays and poetry, co-edited by Sequoia Maner, Emily Ruth Rutter, & Darlene Anita Scott, that investigates contemporary elegy within the Black diaspora. Scores of contemporary Black writers have turned to elegiac poetry and prose in order to militate against the white-supremacist logic that has led to the recent deaths of unarmed Black men, women, and children. This volume combines scholarly and creative understandings of the elegy in order to elucidate how mourning feeds our political awareness in this dystopian time, as Black writers attempt to see, hear, and say something to the bodies of the dead as well as to living readers. Moreover, this book provides a model for how to productively interweave theoretical and deeply personal accounts to encourage discussions about art and activism that transgress disciplinary boundaries, as well as lines of race, gender, class, and nation.

Angela Jackson-Brown is an award-winning writer, poet and playwright who teaches Creative Writing and English at Ball State University in Muncie, IN. She is a graduate of Troy University, Auburn University and the Spalding low-residency MFA program in Creative Writing. She is the author of the novel Drinking From A Bitter Cup and has published in numerous literary journals. Angela’s play, Anna’s Wings, was selected in 2016 to be a part of the IndyFringeDivaFest and her play, Flossie Bailey Takes a Stand, was part of the Indiana Bicentennial Celebration at the Indiana Repertory Theatre. She also wrote and produced the play It Is Well and she was the co-playwright with Ashya Thomas on a play called Black Lives Matter (Too). In the spring of 2018, Angela co-wrote a musical with her colleague, Peter Davis, called Dear Bobby: The Musical, that was part of the 2018 OnyxFest in Indianapolis, IN. Her book of poetry called House Repairs was published by Negative Capability Press in the fall of 2018, and in the fall of 2019, she directed and produced a play she wrote called Still Singing Those Weary Blues. Her new novel, When Stars Rain Down, to be published by Thomas Nelson, an imprint of HarperCollins, was recently published and Angela was recently awarded, by the Alabama Library Association, the Alabama Authors Award in poetry.

Lauren K. Alleyne hails from the twin island nation of Trinidad and Tobago. Her fiction, poetry and non-fiction have been widely published in journals and anthologies, including The Atlantic, Ms. Muse, Women's Studies Quarterly, Interviewing the Caribbean, Crab Orchard Review, among many others. She is author of Difficult Fruit (Peepal Tree Press, 2014) and Honeyfish (New Issues (US) & Peepal Tree (UK), 2019).

Sequoia Maner is a poet and Assistant Professor of African American literature at Spelman College. Her writing has been published in The Feminist Wire, Meridians, Obsidian, The Langston Hughes Review, and other venues. She is a co-editor of Revisiting the Elegy in the Black Lives Matter Era (Routledge 2020). She is at work on a manuscript regarding Kendrick Lamar's album To Pimp a Butterfly for the 33 1/3 series (Bloomsbury) and her prize-winning chapbook, Little Girl Blue: Poems will be published in October 2021 (Host Publications).

Emily Ruth Rutter is an Associate Professor of English at Ball State University. She is the author of Invisible Ball of Dreams: Literary Representations of Baseball behind the Color Line(University Press of Mississippi, 2018), The Blues Muse: Race, Gender, and Musical Celebrity in American Poetry(University of Alabama Press, 2018), and the forthcomingBlack Celebrity: Contemporary Representations of Postbellum Athletes and Artists (University of Delaware/Rutgers University Press, 2021). Along with Tiffany Austin, Sequoia Maner, and Darlene Anita Scott, she co-edited Revisiting the Elegy in the Black Lives Matter Era (Routledge, 2020).

Darlene Anita Scott’s recent writing appears in Simple Machines, Green Mountains Review, and Pen + Brush. Her art can be viewed in 805 Lit + Art, The West Review, and The Journal ofCompressed Arts and her photography in Barren Magazine, Auburn Avenue, and Persephone’s Daughters. Scott is co-editor of Revisiting the Elegy in the Black Lives Matters Era and her debut poetry collection, Marrow, is forthcoming from University Press of Kentucky in 2022.

Some of Richard Byrt’s work, as a published poet, and for two LGBT+ history projects, explores reasons, individually and in society, for offensive, discriminatory beliefs and actions. Writing about these topics is not intended to cause hurt and offence (apologies if it does), but, hopefully, increases his self-reflection and understanding.

Tanisha Barrett is a mental health nurse, delivering therapy and also teaching about diversity and difference. She is a proud, black queer woman who is very passionate about dismantling systemic inequalities. In her spare time, she writes poems about mental health, race, sexuality and body image. Instagram @blacksugarising

Paul Francis is a retired teacher living in Much Wenlock, Shropshire. He is active as a writer and performer in the West Midlands poetry scene, and is also the author of several pamphlets as well as Sonnets with notes (2019). During lockdown he posted a sonnet a day, at http://www.paulfranciswrites.co.uk/paulfrancispoems?category=Sonnets 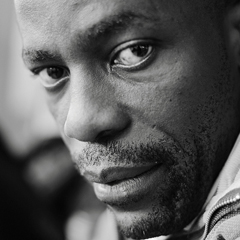 Ambrose Musiyiwa coordinates Journeys in Translation, an international, volunteer-driven project that is translating poems from Over Land, Over Sea: Poems for those seeking refuge (Five Leaves Publications, 2015) into other languages. He edited books that include Black Lives Matter: Poems for a New World (CivicLeicester, 2020), Bollocks to Brexit: an Anthology of Poems and Short Fiction (CivicLeicester, 2019), Leicester 2084 AD: New Poems about The City (CivicLeicester, 2018) and Welcome to Leicester: Poems about The City (Dahlia Publishing, 2016). He is the author of The Gospel According to Bobba.


Over The Edge is inviting you to the June Over The Edge: Open Reading on Zoom. Friday, June 25th, 8pm

Over The Edge acknowledges the ongoing financial support of the Arts Council,