The November Over The Edge: Open Reading takes place in Galway City Library on Thursday, November 23rd, 6.30-8.00pm. The Featured Readers are Penelope Shuttle, Ursula Shields-Huemer, & Gillian Hamill. The centre piece of the evening will be the launch of issue nine of Skylight 47, the exciting bi-annual poetry paper from the Skylight Poets, which will be on sale on the evening. The publication will be launched by Penelope Shuttle. Skylight 47 is based in Galway and publishes poems by poets from all around the globe; all poets are welcome to submit poems for consideration for future issues. For details on how to take out a subscription to Skylight 47 see here.

Originally from the village of Eglinton in Derry, Gillian Hamill has lived in Dublin for the past 13 years (intermingled with stints in Galway, Waterford and Nice). She has a BA in English Studies from Trinity College, Dublin and a MA in Journalism from NUI Galway. She is currently the editor of trade publication, ShelfLife magazine and has acted in a number of theatre productions. Gillian started writing poetry in late 2014.

Ursula Shields-Huemer is Austrian and has lived in Ireland for 25 years. She is a psychotherapist and Jungian analyst. Her poems have grown from a longtime engagement with language and creativity  – supported by classes with Kevin Higgins and Susan Millar DuMars. Ursula was recently invited to present poems at a conference on artist Caspar Walter Rauh. She was shortlisted for the 2017 Over the Edge New Writer’s award.

Penelope Shuttle has lived in Cornwall since 1970, and is the widow of the poet Peter Redgrove. Her first collection of poems, The Orchard Upstairs (1981) was followed by six other books from Oxford University Press, and then A Leaf Out of His Book (1999) from Oxford Poets/Carcanet, and Redgrove’s Wife (2006) and Sandgrain and Hourglass (2010) from Bloodaxe Books. Redgrove’s Wife was shortlisted for both the Forward Prize and the T.S. Eliot Prize in 2006. Sandgrain Her retrospective, Unsent: New & Selected Poems 1980-2012 (Bloodaxe Books, 2012), drew on ten collections published over three decades. Her most recent collection, Will you walk a little faster?, was published by Bloodaxe in May . First published as a novelist, her fiction includes All the Usual Hours of Sleeping (1969), and Rainsplitter in the Zodiac Garden (1977).With Peter Redgrove, she is co-author of The Wise Wound: Menstruation and Everywoman (1978) and Alchemy for Women: Personal Transformation Through Dreams and the Female Cycle (1995). Shuttle’s work is widely anthologised and has been broadcast on BBC Radio 3 and 4, and her poem ‘Outgrown’ was used recently in a radio and television commercial. She is current Chair of the Falmouth Poetry Group, one of the longest-running poetry workshops in the U.K. 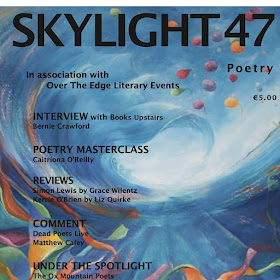 The MC for the evening will be Susan Millar DuMars. For further details phone 087-6431748.