May Over The Edge Writers’ Gathering at Charlie Byrne’s Bookshop


May Over The Edge Writers’ Gathering
at Charlie Byrne’s Bookshop

The May Over The Edge Writers’ Gathering presents readings by fiction writer Anna McCarthy, and poets Cormac Culkeen, Billy Ramsell & Maeve O’Sullivan. The evening will also see a reading, by members of his family, from Tom Duddy’s posthumously published second poetry collection: The Years (HappenStance Press, 2014).  The event will take place at Charlie Byrne’s Bookshop, Middle Street, Galway on Saturday, May 17th, 6pm. All are welcome. There is no cover charge.

Tom Duddy was born in 1950 in Ramolin, near the small town of Shrule, Co. Mayo. He came to live in Galway in 1969, and later taught Philosophy in the School of Humanities at NUI Galway. His academic publications include A History of Irish Thought and Dictionary of Irish Philosophers. A chapbook of his poems, The Small Hours, was published in 2006, and his first full collection, The Hiding Place, in 2011. Sadly, in 2012, Tom became ill and died, aged 62. A posthumous collection, The Years, was published earlier this year by HappenStance Press.


Anna McCarthy was born in London and lives in New York with her husband and young daughter. Her work has appeared in Otoliths and was featured in the 2012 Du Maurier Festival. She was an Iowa Review Short Story Awards finalist in 2013 and the winner of the hotly contested fiction category in the 2013 Over the Edge New Writer of the Year competition. She teaches at New York University.


Billy Ramsell was born in Cork in 1977 and was educated at the North Monastery and UCC. Complicated Pleasures, his first collection, was published by the Dedalus Press in 2007. He holds the Chair of Ireland Bursary for 2013 and has been shortlisted for several other prizes. He edits the Irish section of the Poetry International website and co-runs an educational publishing company. His most recent collection: The Architect’s Dream of Winter was published in 2013.


Cormac Culkeen is a writer of poetry, fiction and short stories from Dunmore, Co. Galway. Some years ago his work was published in The Burning Bush literary magazine, and more recently, his work has been published in Skylight47. He has been a featured reader at the Over the Edge open reading in October 2012. He lives and works in Galway and has been attending creative writing classes at Galway Technical Institute with Susan Millar Dumars.


Maeve O’Sullivan’s poems have been widely published and anthologised since the mid-1990s. Initial Response, her debut collection of haiku poetry was published by Alba Publishing in 2011, and was well-received by critics. She also performs at festivals and literary events with the spoken word group The Poetry Divas. Her poem ‘Leaving Vigo’ was recently nominated for a Forward Prize for a Single Poem by Revival magazine. Her poetry collection Vocal Chords was published earlier this year by Alba Publishing.

Over The Edge acknowledges the ongoing financial support of the Arts Council and Galway City Council. 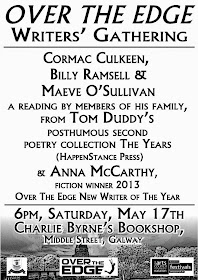