Over The Edge  presents the first ‘Over The Edge: Open Reading’ of 2014 at Galway City Library on Thursday, January 23th, 6.30-8.00pm. The Featured Readers are Mary O’Donnell, 2013 Over The Edge New Writer of The Year Breda Wall Ryan & Breege Bogusia Wardein. The centre piece of the evening will be the launch of issue number three of Skylight 47, the exciting bi-annual poetry paper from the Skylight Poets, which will be on sale on the evening. The publication will be launched on the evening by Mary O’Donnell. Skylight 47 is based in Galway and publishes poems by poets from all around the globe; all poets are welcome to submit poems for consideration for future issues. This new issue includes new poems by established and emerging poets, an interview with Kay Ryan U.S. Poet Laureate 2008-10 & winner of the Pulitzer Prize; reviews of Richard Halperin by Pat McMahon, Susan Miller DuMars by Maurice Devitt & Kimberly Campanello by Breda Spaight; an article about the Garden Room Writers, Donegal; a poetry masterclass with Drucilla Wall; & comment by Kevin Higgins on the sometimes vexed question of corporate sponsorship of literary events.


For details on how to take out a subscription to Skylight 47 see here http://www.overtheedgeliteraryevents.blogspot.ie/2012/11/skylight-47-possibly-irelands-most.html

Breege Bogusia Wardein better known in Ireland as Breege was born in Poland, but her heart belongs to Galway where she has spent her formative months. Her poetry has been published in a variety of magazines in Ireland, UK and US including Revival, Crannóg, THE SHOp, Orbis, The Journal, Poetry Wales, Emerging Literary Journal. It was also anthologised in Embers of Words - An Irish Anthology of Migrant Poetry and Wayword Tuesdays by the Galway based Tuesday Knights poetry group. Five of her poems have most recently appeared in the Indian magazine Kavya Bharati. In 2013 she was nominated for the Forward Prize. She is currently longlisted in a poetry competition with a long list poem what makes her feel like a World Cup winner. For more information about her and her poetry visit http://www.bogusiawardein.com When she lived in Galway, Breege Bogusia was a participant in a variety of poetry workshops facilitated by Kevin Higgins.


Breda Wall Ryan grew up in rural Co. Waterford. She began writing in 2003 under the mentorship of the late Dorothy Molloy. Her fiction has been published in New Irish Writing, The Stinging Fly and in several anthologies, including The Faber Book of Best New Irish Short Stories and The New Hennessy Book of New Irish Short Fiction. She turned to writing poetry in 2008 and has since been published in anthologies, and in print and on-line journals in Ireland, Britain, the USA and Mexico, and has been shortlisted or placed in many contests. 2013 was a very auspicious year for her: her unpublished collection was awarded Joint 3rd place in the Patrick Kavanagh Awards and individual poems were shortlisted in the Desmond O’Grady Competition, were nominated for a Pushcart Prize and won the iYeats, Poets Meet Painters and Dromineer Literary Festival. She has an M Phil in Creative Writing from Trinity College Dublin, has completed a Faber Becoming a Poet Course and is a founder member of Hibernian Poetry. She lives with her family near the sea in Bray, Co Wicklow. Breda Wall Ryan is 2013 Over The Edge New Writer of The Year. 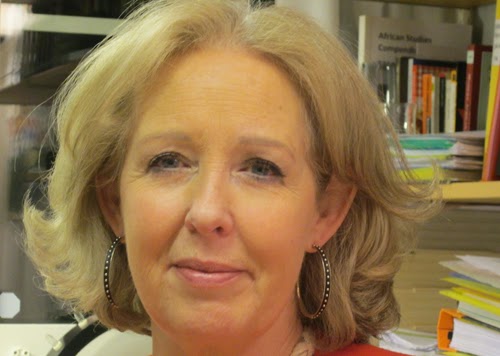 Mary O’Donnell’s first three poetry collections were published by Salmon Poetry. Other collections include September Elegies (Lapwing Press, Belfast 2003) and her selected poems, The Place of Miracles (New Island, 2006). The Ark Builders, appeared from Arc Publications UK in 2009, followed by an anthology of Galician poetry in translation – To the Winds Our Sails: Irish Poets Translate Galician Poetry – which she co-edited with Dr. Manuela Palacios, from Salmon Poetry. Her Selected Poems were published in Hungarian in 2011 and she was recently the co-winner of the Irodälmi Jelen translation prize. She has also written three novels and two collections of short fiction, and her new novel Where They Lie, an engrossing tale of a family’s attempt to recover the bodies of their murdered sons, will be published next April by New Island.  She has judged the International IMPAC Dublin Literary Award, the Hennessy Literary Award, the Strokestown International Poetry Competition and most recently the Irish Times/Mountains to Sea Poetry Prize. A member of Aosdána, she teaches creative writing at NUI Maynooth. As well as reading her own work, Mary O’Donnell will launch the new issue of Skylight 47.

As usual there will be an open-mic after the Featured Readers have finished. Contributors to the new issue of Skylight 47 are particularly welcome to read their Skylight 47 poems at the open-mic; those wishing to take part should get to Galway City Library by 6.20pm, at the latest, and give their names to Kevin Higgins, who The MC for the evening will be Susan Millar DuMars. For further details phone 087-6431748. 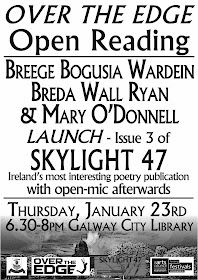 Over The Edge acknowledges the ongoing generous financial support of Galway City Council & The Arts Council. We are delighted that Over The Edge will continue to receive the same level of funding in 2014, from both Galway City Council & the Arts Council, as we did in 2013. In the circumstances, this is a spectacular result and a tribute to our work.

IMPORTANT Salmon Poetry recently published Over The Edge – The First Ten Years – An Anthology of Fiction & Poetry (Edited by Susan Millar DuMars). The book will be on sale at all Over The Edge during 2014 and can also be purchased here http://www.salmonpoetry.com/details.php?ID=317&a=39
Over The Edge Literary Events at 2:03 AM
‹
›
Home
View web version