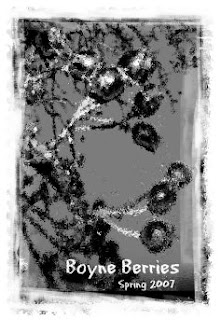 Boyne Berries magazine was launched in spring 2007 by the Boyne Writers Group and it has been published twice yearly since. Boyne Berries includes prose and poetry from Boyne Writers Group members but also receives submissions from elsewhere in Ireland and from all over the world. It has published poems and stories from as far away as Australia, New Zealand, Nepal and India in its nine issues so far. The group is especially pleased to have given many writers their first publication opportunity.

Boyne Berries’ simple spare style and trademark covers have become well-known among Irish writers but this ten has a different look and feel. Boyne Berries 10, is a special celebratory issue in a larger format with pictures and graphics as well as the usual prose, poems and drama. The cover has a striking colour image of Trim Castle floodlit at night by Greg Hastings whose images have been featured on the previous nine covers.

The titles of some of the other pieces give some idea of the variety of subject matter in the magazine: 'Leaving Nagasaki'; 'In Times of Deep Recession'; 'An American Mother’s Day in Ireland'; 'Thirteen Superstitions'; 'Allotment Allure'.

To mark this the tenth issue there will be a special Galway launch from 6pm on Friday 30 September in Charlie Byrne’s Bookshop, Middle Street, Galway. Kevin Higgins will perform the official launch there and will read his contribution. Other contributors from the Galway area in this issue include Alan McMonagle, Liam Duffy, Rachel Coventry, Méabh McDonnell and Mari Maxwell.

The Boyne Writers Group was founded in March 2006 and meets twice monthly in the Castle Arch Hotel, Trim, Co. Meath. Its members are drawn from south Meath and surrounding counties and write poetry, prose and drama. Many have been published and have won awards in literary competitions. They have organised regular readings in Trim, a satire competition and poetry readings in connection with Trim Swift Festival and have organised events for All Ireland Poetry Day.
Over The Edge Literary Events at 12:05 AM
‹
›
Home
View web version