Summer Literary Extravaganza at Over The Edge June Writers' Gathering

The Over The Edge June Writers’ Gathering presents a summer literary extravaganza of readings by poets and fiction writers from Italy, Albania, the United States and Ireland at The Kitchen @ The Museum, Spanish Arch, Galway on Friday, June 24th, 8pm. The evening will include the Galway launch of new poetry collections by Joseph Lennon and Ndrek Gjini. Fiction writer Jim Mullarkey will read from his forthcoming collection of short stories. Italian poets Luca Artioli, Andrea Garbin, Fabio Barcellandi and their translator Dave Lordan will read from their recent publication Poethree-New Italian Voices (Thauma Edizioni, 2011). All are welcome.

Joseph Lennon was born in Newport, Rhode Island, and grew up in Rochester, a small town in central Illinois. He has lived in Ireland and Italy and travelled throughout India. After a decade in New York City, teaching at Manhattan College, he now lives in Philadelphia with his family and is Director of Irish Studies at Villanova University. He has published poetry and critical essays on Irish literature and postcolonial studies. His book Irish Orientalism: A Literary and Intellectual History (Syracuse UP, 2004) won the Donald J. Murphy Prize for Distinguished First Book from the American Conference for Irish Studies. Fell Hunger is Joseph’s first collection of poetry and was published in April by Salmon Poetry.

Ndrek Gjini was born in Albania in the 1960s. From 1984 to 1988 he was a student at the University of Shkoder in Albania. After graduation he worked first as a teacher and then as a journalist. During these years he published poems and many newspaper articles in the Albanian language. In 2002, Ndrek moved to the West of Ireland. In 2004, he undertook a course that led to a National Certificate in Print Journalism; at GMIT he earned a BA honours in Heritage Studies. At present, he is enrolled in the MA in Writing at NUI Galway. His poems in English have recently been published in Cyphers magazine. The Death of Night is Ndrek’s first collection of poems in the English language and is just published by EMAL.

Jim Mullarkey lives in Galway. He was a member of Galway City Council for 1993 to 1999 before turning his hand to writing. He has been short-listed for the Raymond Carver Short Story Award and the Fish Short Story Competition. His story ‘Heaven’ was runner-up in the RTE Francis McManus Award. Jim read at the inaugural Cúirt Festival/Over The Edge showcase reading in April 2006. His first collection of short stories, Murph’s Advice, will be published by Doire Press in September.

Dave Lordan's latest collection of poems is Invitation to a Sacrifice (Salmon Poetry, 2010) which was called by The Irish Times 'an act of cultural resistance, as brilliant on the page as it must surely be in performance'. Eigse Riada theatre company produced his first play, Jo Bangles, at the Mill Theatre, Dundrum in 2010. Forthcoming are Assassin for Higher from Wurm Press in Nov 2011 and his first collection of short stories Out of My Head due out from Salmon Publishing in Summer 2012. He can be contacted at dlordan@hotmail.com 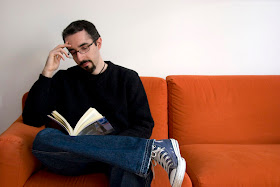 Luca Artioli
Luca Artioli was born in Mantova in 1976, where he still lives.He was the creator and co-founder of the “Confraternita dell’ “Uva”, a group of writers 25 from Mantova / Modena / Como. He’s currently a member of the “Movement from the Underground”, a literary group for the union of the arts, based in Montichiari (BS). His official website is http://www.lucaartioli.it/ His books are Fragili Apparenze (Apparent fragilities) (Poems - TCM Editions, Mantova, 2005) and Suture (Sutures) (Poems - Ed. Fara, 2011); 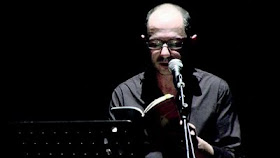 Fabio Barcellandi
Fabio Barcellandi was born in Brescia in 1968. He is part of the group of poets and artists that quickens the literary meetings at the coffee bar Galeter in Montichiari, where he has performed on numerous occasions, from his tentative beginnings to the latest missives. He is from under the earth. What they say of him is that he walks hand in hand with death, whistling He has published two collections of poems: Parole alate (Winged words) (Cicorivolta editions, 2007) and Nero, l’inchiostro (Black Ink) (Montag editions, 2008). 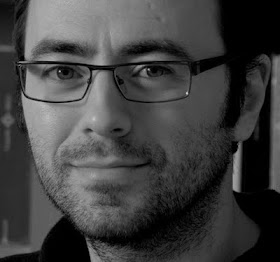 Andrea Garbin
Andrea Garbin lives and works in the province of Mantova. He has published the poetry Il senso della musa (The sense of the Muse) (Aletti, 2007) and Latex (Fara, 2009) and some short-stories in the anthologies Per natale non esco (For Christmas I don’t go out) (TranseuropaLibri, 2008) and Il rumore degli occhi (The noise of the eyes) (Edizioni Creativa, 2009).

Over The Edge acknowledges the ongoing generous financial support of the Arts Council and Galway City Council.
Over The Edge Literary Events at 2:16 PM
‹
›
Home
View web version