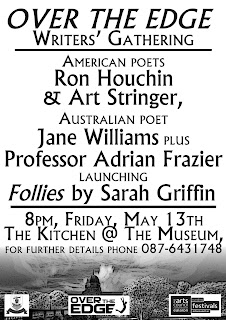 The Over The Edge May Writers’ Gathering presents readings by poets from the United States and Australia plus the launch of a new collection of poetry by one of Irish poetry’s exciting new talents. Art Stringer, Ron Houchin & Jane Williams will read their work at The Kitchen @ The Museum, Spanish Arch, Galway on Friday, May 13th, 8pm. The evening will also see the launch by Professor Adrian Frazier of Follies, the debut poetry collection by Sarah Griffin, which has just been published by Lapwing Press. All are welcome.

A. E. Stringer is the author of two collections of poems, Channel Markers (Wesleyan University Press) and Human Costume (Salmon Poetry). His work has appeared in such journals as The Nation, Antaeus, The Ohio Review, Denver Quarterly, Prairie Schooner, Shenandoah, Poetry Northwest, and in Backcountry: Contemporary Writing in West Virginia. He has edited and introduced a new edition of Louise McNeill’s Paradox Hill, (West Virginia University Press, 2009). He has read his work in a wide range of American locales and also previously in Galway. For twenty years, he has taught writing and literature at Marshall University in West Virginia USA.

Ron Houchin lives on the banks of the Ohio River across from his hometown of Huntington, West Virginia. For thirty years, he taught public school in the Appalachian region of southernmost Ohio. He has three books published by Salmon Publishing, Death And The River (1997), Moveable Darkness (2002), and Museum Crows (2009). His other books Among Wordless Things (2004) and Birds In The Tops Of Winter Trees (2008) were published by Wind Publications of Nicholasville, Kentucky. His awards include Appalachian-Book-of-the-Year-in-Poetry, a National Society of Arts and Letters Prize, an Ohio Arts Council Fellowship, a poetry prize from Indiana University, a Writers’ Digest Award.

Jane Williams was born in England in 1964 to an Irish father and Australian mother. She has lived all her adult life in Australia where her poetry has been widely published since the early 1990’s. Awards for her poetry include the Anne Elder Award for her first book outside temple boundaries, the Bruce Dawe Poetry Prize and the D.J.O'Hearn Memorial Fellowship. She is the author of four collections of poems and lives in Tasmania. Samples of her work can be found at http://www.janewilliams.wordpress.com/

Sarah Maria Griffin is currently completing her MA in Writing at NUI Galway. Sarah won first prize at the 2010 Over the Edge Fiction Slam in Galway and has appeared on RTE Radio’s Arena speaking about and performing her poetry. She recently took part in a Culture Ireland sponsored showcase of the best of Irish performance poetry at the famous Nuyorican Poets’ Café in New York City. Follies, Sarah’s debut collection of poetry, has just been published by Lapwing Press and will be launched by Professor Adrian Frazier, Director of the MA in Writing at NUI Galway.

Over The Edge acknowledges the ongoing generous financial support of the Arts Council and Galway City Council.
Over The Edge Literary Events at 12:06 AM
‹
›
Home
View web version