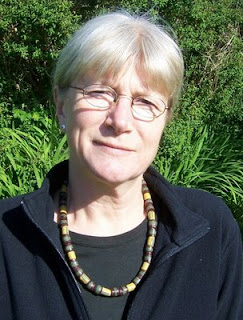 Hajo Quade was born in Germany but has lived in Galway since 1989. He took up writing in 2007 when he did a number of creative writing classes with Susan Millar DuMars. He was runner-up in the 2008 Over The Edge New Writer of The Year competition. Hajo works as a freelance translator and teaches survival techniques for those unfortunate enough to have to battle personal computers on a regular basis.

Marie Cadden was reared in Dublin and the North of England. She has lived in Spiddal, Co. Galway since 1977. She was a teacher of deaf children and children with autism, retiring last year. She is a participant in the Advanced Poetry Workshop at Galway Arts Centre. Her poems have been accepted for publication by Revival and THE SHOp. Marie was longlisted for Over the Edge New Writer of the Year 2008. She has read her poems at Westside Arts Festival & The White House. She was recently a featured poet on Flirt fm radio.

Geraldine Mitchell was born in Dublin and lives near Louisburgh, Co. Mayo. In between she has lived in France, Algeria, Spain and England where she taught English and worked as a freelance journalist. Her previous publications include two novels for young people and a biography. Her poems have been widely published in Irish journals and in the Oxfam Calendar 2009. She is the winner of the Patrick Kavanagh Poetry Award 2008. In their comments the judges, Moya Cannon and Theo Dorgan, said that Geraldine’s poems display: “a clear-eyed sensibility that considers, but does not judge human fragility”.

As usual there will be an open-mic after the Featured Readers have finished. New readers are always most welcome. The MC for the evening will be Susan Millar DuMars. For further details phone 087-6431748.Over The Edge acknowledges the ongoing generous financial support of Galway City Council & The Arts Council.
Over The Edge Literary Events at 4:24 PM
‹
›
Home
View web version