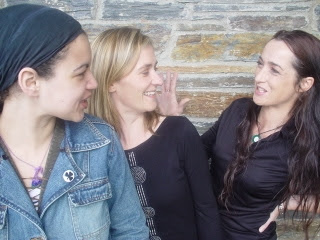 also the return of the North Beach Poetry Nights' Slam

and INTRODUCING the NORTH BEACH POETRY PUBLICATION PRIZE for the Winner of the North Beach Poetry Nights' Grand Slam to be held on Saturday 22 December in the Bank of Ireland Theatre, NUIG.

Pamela Brown
Pamela is a published poet and creative writing facilitator who has written comedy sketches for radio. She has had two plays produced; one was performed at the Edinburgh Fringe Festival 1993. Collaborating with photographer Jan Voster, her work has also been exhibited in Holland. Pamela helped establish The Poets' Corner, a wall in the Gasyard area of Derry displaying poems from local teenagers and primary school children. She received a commendation in Community Drama at the University of Ulster, Magee and has participated in workshops by Augusto Boal - Theatre of the Oppressed, and Barney Simon - The Market Theatre, Johannesburg. A creative writing facilitator, Pamela also practices Bio-energy, Reiki and Tai Chi.

Jenni Doherty
Donegal-born, Jenni has worked in bookshops, with local publishing houses and as an arts & book reviewer for the local press. In 2006 she directed a multi-creative discipline project called EVE... a Celebration of Creative Women, published with Guildhall Press, Derry and is about to publish another anthology, Wonderful World of Worders involving over 70 international writers. Co-author of local folklore book, That Land Beyond, she has also toured Australia with the Belfast Poets Tour Group in 2006 and was a finalist in the Queensland SLAM. She works in Waterside Library and for Guildhall Press as well as co-facilitates youth creative writing workshops and runs the monthly BBC RaW Poetry Place in Derry's Central Library.

Abby Oliveira
Abby has lived in Northern Ireland since 1994. She was the winner of the Belfast Poetry Performance Cup 2006 and Cúirt SLAM Finalist 2007. Literary Festival Facilitator for the Gasyard Féile 2005, Abby also has a strong background in the Performing Arts. She has facilitated poetry workshops in Toronto, Canada, and performs regularly with In Your Space theatre company. Abby has a BA (Hons) in Theatre Studies from the University of Ulster, Coleraine and she was awarded a First Class Honours Degree and the Dean's Prize, 2005. She also conducts art and craft workshops with groups of all ages and is a Bio-energy and Reiki practitioner.

THE NORTH BEACH POETRY NIGHTS' GRAND SLAM and PUBLICATION PRIZE: The winner of each of the 10 North Beach Poetry Nights' Slams from August until 20 December will go through automatically to the Grand Slam on Saturday 22 December.

Another 10 entrants will be selected by submission of written and recorded material. Submission fee: 10 Euro.

The winner of the North Beach Nights' Grand Slam will be chosen by a team of experienced poetry performance judges.

The prize is publication of a collection of the winner's poetry.