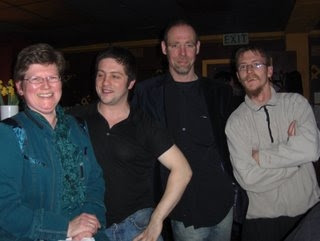 2006 Cúirt Grand Slam Winner, Brendan Murphy, recently took part in the Semi-final of the BBC Radio 4 Poetry Slam in Manchester. Brendan is representing Ireland, having won the Irish heat which took place in Belfast back in May. With some ease Brendan qualified for the Final which will take place in Bristol on Saturday, September 8th, when there will be five other finalists.

Brendan's winning semi-final performance was broadcast on BBC Radio 4 on Thursday, September 6th at 11pm. To listen to it click on
http://www.bbc.co.uk/radio4/arts/poetry_slam.shtml
Over The Edge Literary Events at 6:42 AM
‹
›
Home
View web version