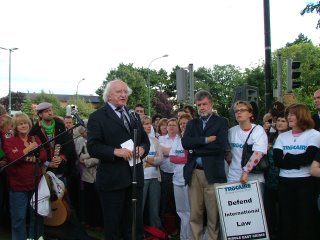 Michael D. Higgins is a Labour TD for Galway West and has twice been Mayor of Galway. From 1993 to 1997 he was Minister for Arts, Cultures & The Gaeltacht. He is currently Spokesperson on Foreign Affairs for The Labour Party. He has published three poetry collections, The Betrayal, published by Salmon, The Season of Fire, published by Brandon, both illustrated by Mick Mulcahy, and An Arid Season published in 2004 by New Island Books. He has read his poems on a number of radio and television programmes. He was a featured reader at Over The Edge in September 2004 and also read at the Baffle Festival last year.

Michael D has always been a strong supporter of inovation in the arts, and this reading is a first for the poetry slam movement internationally. It is the first time anywhere in the world that a former Government minister has taken part in a poetry slam.

The North Beach Nights Slam is open to everyone. Newcomers are welcome.

Please bring two max. three minute performance pieces and be there early to get your name down. The prize for the winner is the honour and a bottle of red wine generously donated by BK's Winebar.

And remember! The Galway Arts Centre Ruby Room Slam returns at the King's Head on Tuesday 26th September at 7pm. Don't miss it!