The October ‘Over The Edge: Open Reading’ takes place on on Zoom on Thursday, October 29th at the usual Over The Edge time 6.30-8.00pm (local Galway time).

There will as usual be an open-mic after the Featured Readers have finished. Anyone interested in taking part in the open-mic should text Kevin Higgins on 087-6431748 or email over-the-edge-openreadings@hotmail.com between 6pm and 6.30pm on the evening of the reading. The MC for the evening will be Susan Millar DuMars.

Niamh Flynn is a native of Galway and works as a sports psychologist at The Galway Clinic. Over the years she has written for The Irish Examiner, Mature Living Magazine, Gaelic World, High Ball, Ireland's Dental Magazine, The Waiting Room and many more publications. Her book End Migraine Fast was taken up earlier this year by a French Publisher and is due to be published in France in 2021. She is currently in talks with agents regarding the publication of her most recent work ‘She Kept Walking’. It is based on a true story which documents the life of a young man, Seánie Ó Lionsaigh, growing up in abject poverty in the West of Ireland in the 1970s. 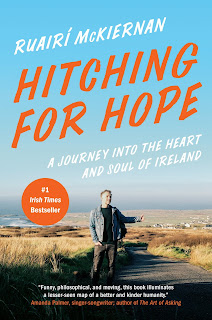 Ruairí McKiernan is originally from Cootehill in County Cavan; he now lives in Lahinch. His debut book Hitching for Hope – a Journey into the Heart and Soul of Ireland was recently published by US publisher Chelsea Green and went straight to number 1 in the Nielsen paperback non-fiction bestseller charts. Described as a “powerful manifesto for hope and healing in troubled times”, Hitching for Hope is part personal pilgrimage, part political quest. The book is a reflection of a hitchhiking listening tour McKiernan undertook around Ireland during the last recession while contemplating the prospect of emigration. The book is also a memoir reflecting on his 20 years’ work as a campaigner and social innovator, which includes 7 years as one of President Higgins’ appointees to the Council of State. Of Hitching for Hope, Christy Moore has said: “Ruairí McKiernan takes time to look behind the stone walls of Ireland. He takes note of what many of us sometimes fail to see.” Colum McCann has described the book as “a paean to nuance, decency and possibility”; while Peggy Seeger said Hitching for Hope is “Irish to its core and international in its search for optimism and communal involvement, it’s an easy and uplifting read.” 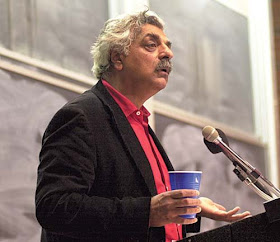 Tariq Ali was born in 1943 in what is now Pakistan while it was still under British rule. He has lived in London since he was a student and has been a leading figure of the international left since the 60s. He has been writing for the Guardian since the 70s. He is a long-standing editor of the New Left Review and a political commentator published on every continent. He has published dozens of books, including The Clash of Fundamentalisms: Crusades, Jihads and Modernity  (Verso, 2003), The Duel: Pakistan on the Flightpath of American Power (Scribner, 2009), and The Obama Syndrome (Verso Books, 2010). He has also published a number of novels, including Redemption (Chatto & Windus, 1990), a bawdy satire on late 20th century Trotskyist groups set in Paris, New York, Mexico City and London, and Fear of Mirrors (Arcadia Books, 1998),  set in post-Stalinist eastern Germany. Mick Jagger allegedly wrote the Rolling Stones’ song ‘Street Fighting Man’ about Tariq Ali after he attended a 1968 anti-war rally at London's US embassy in Grosvenor Square, during which mounted police battled with tens of thousands of demonstrators.

Over The Edge is inviting you to the October Over The Edge: Open Reading on Zoom. Thursday, October 29th, 6.30-8pm

As usual there will be an open-mic after the Featured Readers have finished. New readers are always especially welcome. For further details phone 087-6431748.