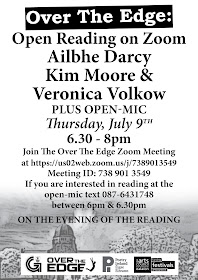 After the big success of the June reading, the July ‘Over The Edge: Open Reading’ takes place on Zoom on Thursday, July 9th  at the usual Over The Edge time 6.30-8.00pm (local Galway time). The Featured Readers are Veronica Volkow, Ailbhe Darcy, & Kim Moore. There will, as always at Over The Edge: Open Readings, be an open-mic after the Featured Readers have finished. New readers are always especially welcome at the open-mic. Anyone interested in taking part in the open-mic should text Kevin Higgins on 087-6431748 or email over-the-edge-openreadings@hotmail.com between 6pm and 6.30pm on the evening of the reading. The MC for the evening will be Susan Millar DuMars.

Join us at https://us02web.zoom.us/j/7389013549
Meeting ID: 738 901 3549
Kim Moore was born in 1981 and lives and works in Cumbria. She is one of the leading newer voices in British poetry. Kim Moore’s first collection The Art of Falling (Seren, 2015) won the 2016 Geoffrey Faber Memorial Prize. She won a Northern Writers Award in 2014, an Eric Gregory Award in 2011 and the Geoffrey Dearmer Prize in 2010.  Her pamphlet If We Could Speak Like Wolves was a winner in the 2012 Poetry Business Pamphlet Competition.  She is a PhD candidate at Manchester Metropolitan University, working on her second collection and is one of the judges for the 2020 Forward Prizes for Poetry.
Ailbhe Darcy was born in Dublin in 1981 and brought up there. She studied for her PhD and MFA at the University of Notre Dame in the US, and taught there and at the University of Münster in Germany. She is now a lecturer in creative writing at Cardiff University. She has published her poetry in Ireland, Britain and the US. Selections of her work are included in the Bloodaxe anthologies Identity Parade and Voice Recognition, and in her pamphlet A Fictional Dress (tall-lighthouse, 2009). Imaginary Menagerie (Bloodaxe Books, 2011), her first book-length collection, was shortlisted for Ireland's dlr Strong Award at Poetry Now / Mountains to Sea. A collaboration with S.J. Fowler, Subcritical Texts, was published by Gorse in 2017. Her second collection, Insistence, was published by Bloodaxe in 2018 and was shortlisted for the T.S. Eliot Prize 2018 and for the Irish Times Poetry Now Award 2019. She has been described as “the best Irish poet of her generation”.

Veronica Volkow lives in Mexico City and is a poet, and travel writer. She is also the great-granddaughter of co-leader of the Russian Revolution Leon Trotsky. She currently works as a professor and senior researcher at the National Autonomous University of Mexico (UNAM). She has a master's degree in comparative literature from Columbia University, a doctorate in comparative literature from UNAM, and a master's degree in Art History from UNAM. She received the Pellicer Prize for published work in 2004 and the José Revueltas Prize for Literary Essay in 2005. Her line of research is in hermeneutics of art and literature; as a teacher she specializes in poetry-painting relationships. She published a chronicle about daily life in apartheid South Africa, Diary of a Trip in 1988. As a poet her collections include: La Sibila de Cumas, 1974; Ink Coast, 1979; The beginning, 1983; Los caminos, 1989. Arcanos, 1996;  Gold of the Wind, 2003; and Arcana, United Kindom, Shearsman Books, 2009. Her poems have been widely anthologised and translated. Veronica will be reading her poems in both English translation and the original Spanish.

Over The Edge is inviting you to the July Over The Edge: Open Reading on Zoom. Thursday, July 9th, 6.30-8pm

As usual there will be an open-mic after the Featured Readers have finished. New readers are always particularly welcome. The MC for the evening will be Susan Millar DuMars. For further details phone 087-6431748.