May Over The Edge: Open Reading with Jacqueline Saphra, Anne Walsh Donnelly, Jessamine O’Connor PLUS launch of issue 10 of Skylight 47

The May ‘Over The Edge: Open Reading’ takes place in Galway City Library on Thursday, May 31st, 6.30-8.00pm. The Featured Readers are Jacqueline Saphra, Jessamine O’Connor, &Anne Walsh Donnelly. The evening will also see the launch, by Jacqueline Saphra, of issue ten of perhaps Ireland’s most exciting, informative, and accessible poetry magazine Skylight 47. There will be readings by contributors. All welcome. 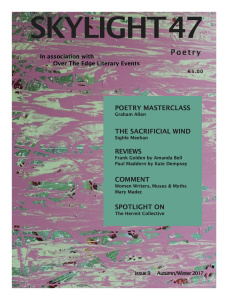 Anne Walsh Donnelly lives in Mayo. Her work has been published in literary magazines such as Crannog, Boyne Berries and Inside the Bell Jar. Her stories have been shortlisted in competitions such as the Fish International Prize and RTE Radio One Frances Mac Manus competition. She was highly commended in the OTE New Writer of the Year (Poetry) Award in 2017 and recently won The Blue Nib Poetry Chapbook competition.

Jessamine O Connor facilitates The Hermit Collective arts troupe, The Wrong Side Of The Tracks Writers, and the Ballaghaderreen branch of Failte Isteach conversational English classes. She won the iYeats, the Francis Ledwidge, and the Poetry Ireland Butlers Café poetry competitions, and was short-listed for the Hennessy, Over The Edge, Cuirt New Writing, Galway Hospital Poems For Patience, Bradshaw Books, Leaf Books and Red Line Book Festival competitions. She is currently promoting her fifth chapbook Pact, and her first full collection of poems is coming out with Salmon in early 2020. Jessamine’s website is http://www.jessamineoconnor.com

Jacqueline Saphra’s The Kitchen of Lovely Contraptions (flipped eye 2011) was shortlisted for the Aldeburgh First Collection Prize. If I Lay on my Back I Saw Nothing but Naked Women was published by (The Emma Press 2017) won the Saboteur Award for Best Collaborative Work. In 2017 A Bargain with the Light: Poems after Lee Miller was out from Hercules Editions and her latest collection from Nine Arches Press, All My Mad Mothers, was shortlisted for the 2017 T.S. Eliot prize. She lives in London and teaches at The Poetry School. www.jacquelinesaphra.com

Copies of the new issue of Skylight 47 will be on sale on the evening. The MC for the evening will be Susan Millar DuMars. For further details phone 087-6431748


Over The Edge acknowledges the ongoing generous financial support of Galway City Council, Poetry Ireland & The Arts Council.
Over The Edge Literary Events at 11:31 PM

The May Over The Edge Writers’ Gathering presents an exciting variety of poetry and fiction, including the Galway launch of new poetry collections by Stephanie Conn, Robyn Rowland and Kate Ennals; the launch of Belfast writer Rosemary Jenkinson’s acclaimed new short story collection; and a reading from her work by Ruth Quinlan, the winner of the 2018 Poems For Patience competition. The event will take place at The Kitchen @ The Museum, Spanish Arch, Galway on Friday, May 18th, 8pm. All are welcome. There is no cover charge.

Stephanie Conn, from County Antrim, is a graduate of the Creative Writing M.A. Programme at the Seamus Heaney Centre at Queen’s University Belfast. She is the winner of the 2015 Funeral Services NI Poetry Prize, the 2015 Yeovil Poetry Prize, the inaugural Seamus Heaney Award for New Writing and the 2016 Poetry Business Pamphlet Competition, which culminated in the publication of Copeland’s Daughter. Stephanie has also been shortlisted for many awards, including the 2012 Patrick Kavanagh Award and is the recipient of an ACES award. Her debut collection, The Woman from the Other Side, which we published in 2016, was shortlisted for the 2016 Shine/Strong Award. Stephanie’s follow-up collection entitled Island is published in May, 2018 by Doire Press.

Rosemary Jenkinson was born in Belfast and is an award-winning playwright and short story writer. Her plays include The Bonefire (winner of Stewart Parker BBC Radio Award 2006), The Winners, Johnny Meister + the Stitch, Basra Boy, White Star of the North, Planet Belfast and Meeting Miss Ireland. She won the 2001 Black Hill Magazine Short Story Competition, third prize in the Brian Moore Short Story Awards and was shortlisted for the 2002 Hennessy Award for New Writing. Her first collection of short stories, Contemporary Problems Nos. 53 & 54, was published in 2004 by Lapwing Press. Her second short story collection, Aphrodite’s Kiss & Further Stories, was published by Whittrick Press in 2016. She’s won many General Artist’s Awards from the ACNI and this year she has been awarded Artist-in-Residence at the Lyric Theatre in Belfast. Rosemary’s new short-story collection entitled Catholic Boys is published in May, 2018 by Doire Press.
Robyn Rowland is an Irish-Australian citizen living in both countries. She regularly works in Turkey. She has written 13 books, 10 of poetry. Her latest books are Mosaics from the Map (Doire Press, Galway, 2018), which will have its Galway launch on the evening, and her bi-lingual This Intimate War Gallipoli/Çanakkale 1915 – İçli Dışlı Bir Savaş: Gelibolu/Çanakkale 1915 (republished, Spinifex Press, Australia, 2018). Turkish trans. Mehmet Ali Çelikel. Robyn’s poetry appears in national and international journals and in over forty anthologies, including eight editions of Best Australian Poems. Her work is on film at the National Irish Poetry Archives, James Joyce Library, UCD. Dublin.
Kate Ennals is a poet and writer and has published poems and short stories in a range of literary and on line journals (Crannog, Skylight 47, Honest Ulsterman, Anomaly, The International Lakeview Journal, Boyne Berries, North West Words, The Blue Nib, Dodging the Rain plus many more). In 2017, she won the Westport Arts Festival Poetry Competition. Her first collection of poetry At The Edge was published in 2015. Her second collection, Threads, was published in April 2018 and will have its Galway launch on the evening. She has lived in Ireland for 25 years and currently runs poetry and writing workshops in County Cavan. Kate runs At The Edge, Cavan, a literary reading evening, funded by the Cavan Arts Office. Before doing an MA in Writing at NUI Galway in 2012, Kate worked in UK local government and the Irish community sector for thirty years, supporting local groups to engage in local projects and initiatives. Her blog can be found at http://kateennals.com
This year Ruth Quinlan’s poem ‘Small Acts of Anticipation’ was the winning entry in Galway University Hospital’s Arts Trust’s hotly contested annual Poems  for Patience competition.   The poem will now be included in the Arts Trust’s Poems for Patience permanent poetry collection, on display in Galway University Hospitals. Ruth Quinlan won the 2014 Over the Edge New Writer of the Year Award and the 2012 Hennessy Literary Award for First Fiction. She has been shortlisted or runner-up for other competitions like Cúirt New Writing, the Francis Ledwidge Poetry Awards, and Doolin Writers’ Weekend.

Over The Edge acknowledges the ongoing financial support of the Arts Council,
Poetry Ireland, and Galway City Council.