2016 Over The Edge New Writer of The Year WINNERS

The winner in the Fiction category, and 2016 Over The Edge New Writer of the Year, is Chris Connolly from Dublin for his story 'There's no one new around you'. 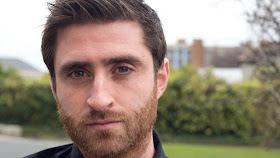 Chris receives €700 in prize money, a hamper of books from Kenny's Bookshop, Galway, and will be a Featured Reader at an Over The Edge: Open Reading in the first half of 2017. Doire Press will read, without prior commitment to publish, a collection of short stories submitted to them by Chris.

The runner-up in the Fiction category is Micheál Ó'Síocháin from Cork for his story 'the auld triangle'.

In third place is Meadhbh Ní Eadhra from County Galway for her story 'Friday'.

Highly commended in the fiction section are Rozz Lewis from Carlow for her story 'Pokey Out Wire', Lauren Foley from Dublin for her story 'I Don't', and Aongus Murtagh, who lives in Berlin, for his story 'He Revisited'.

The winner in the Poetry category is Deirdre Daly from Dublin for her poem 'The Maggies'.

Deirdre receives prize money of €300 and Salmon Poetry will now read, without prior commitment to publish, a collection of poems submitted to them by Deirdre. Deirdre will also read her work at an Over The Edge event during 2017.

The runner-up in the poetry section is Stephen Byrne from Galway for his poem 'Life Without Alcohol'.

In third place is Bogusia Wardein, who lives in Norway, for her poem 'Variations on my mother'.

Highly commended in the poetry section is Patrick Maddock for his poem 'To be a friend'.

First a word on the over all winner - Chris Connolly’s story, ‘There's no one new around you’,  showed an awareness of form usually found in poetry and applied it to a short story. It worked because it expressed the tensions within the story, the tensions in life to conform, to contain something that cannot be contained.

In the best entries the voice was spot on from the very first sentence, pulling the reader in, and making me forget I was judging a competition. With some of the fiction entries they fell down on story, and usually at the end, when trying to wrap things up - that final knowing sentence revealing an author at work. With some, there was a technical error, most likely due to a rushed entry – and most often, it was a change in pov, revealing that some stories were originally written from the first person and changed. One of the strongest poems, which had me thoroughly engaged and moved, fell down on a clichéd last line. It’s frustrating as a judge when this happens, you want good work to do well, and love when a voice is strong and original.

Original, we hear that so much in relation to voice – but what does it mean? While reading these entries, it meant specific, a specific accent and place in a poem or story, a specific subject – general descriptions of general emotions don’t carry the same strength. It meant that even when the voice of the poem or story was in the first person, the I, it didn’t feel like an author trying to write good literature for a competition, but the voice of someone saying something vital to them, something that had to be said. It is hard to pin down, but words like authentic, heart and honest come to mind. Rhythm too, the rhythm of the voice of the poem and story is vital, that it connects to everything else, the theme, tone, subject. Read aloud, the winning and commended works, achieved a flawless flow – their own personal music.

A word on titles, in general they were awful. Weak, with a last minute feel about them. The title allows you to direct a reader through your work. In a poem in particular, it allows you to say something that you have not said ‘in’ the poem. This does not apply to some of the winning and commended – but in general the titles were horrific. With such a high quality of writing, and such strong various voices in the entries, weak titles were a constant. They should not be an afterthought, the work deserves better, have fun, work on them. It didn’t affect my judging I might add, it’s just a general observation.

The entries were of a high level, there was a lot of good writing – There are entries that didn’t make a winning slot here, that will go on to do very well for their authors somewhere else. It is hard to judge stories and poems against each other; maybe it’s even morally wrong. Taste comes into it, every judge has their likes and dislikes, for me - a preaching tone irritates the life out of me. Competitions however do have a role, how else can we encourage and support writers? How else can we give them that thumbs up, to say we love what you’re doing, keep going? It is hard to keep going, to keep the faith that this writing thing is important, worth doing. And it is. To have gotten anywhere in this competition is an achievement, the variety and strength of the work was absolutely inspiring. Keep going.


The shortlist from which the winners were chosen is available here.

October Over The Edge: Open Reading with Lorna Siggins, Bernadette Joyce, & Jackie Walker PLUS announcement of winners of Over The Edge New Writer of the Year


The October ‘Over The Edge: Open Reading’ takes place in Galway City Library on Thursday, October 27th, 6.30-8.00pm. The Featured Readers are Jackie Walker,  Bernadette Joyce, & Lorna Siggins. There will as usual be an open-mic after the Featured Readers have finished.  The evening will also see the announcement of the winners in this year’s Over The Edge New Writer of The Year competition, which received a large number of entries again this year. This year’s competition judge is Niamh Boyce. The shortlist can be read here.

Lorna Siggins has been a staff journalist with The Irish Times since 1988 and is currently the paper’s Western and Marine Correspondent, located in Galway. Formerly based in the Dublin newsroom, her reporting beat has extended from Everest to El Salvador to Erris, and she has also filed news reports from the Atlantic and the Southern Ocean/Antarctica. She has written books on the first Irish ascent of Everest in 1993, on former Irish president Mary Robinson, on air/sea rescue off the Irish coast, and, most recently Once Upon a Time in the West: The Corrib Gas Controversy (Transworld Ireland) on the Corrib gas controversy in north county Mayo.


Bernadette Joyce was born into a large family in Carrowbeg- a tiny village outside Headford. She was part of the Presentation Mission first in New Zealand and then in Chile for some forty years. To write a novel was not on Bernadette’s bucket list but because of her lived experience in shantytowns during the Pinochet years and afterwards, she felt compelled to expose the injustices she witnessed meted out to the poor- their constant struggle to be heard and believed especially in crisis situations as told in Eva's Journey (Columba Press, 2016). Bernadette now lives in Galway.


Jackie Walker has been a teacher and trainer, a community and British Labour Party activist.  Of Jewish and Jamaican ancestry, Jackie was also in the care of the Sisters of Mercy at a Catholic run children’s home in Kent. Known for her humour and insight into the complexity of biracial identity, Jackie Walker contributes a unique voice to the narrative of identity and migration. Though described as a memoir, her book Pilgrim State reads more like a novel. Along with wide critical acclaim Pilgrim State received a ‘Best Publication’ award from the Association for Social Policy for its “lyricism and extraordinary use of narrative voice.”


As usual there will be an open-mic after the Featured Readers have finished. New readers are always especially welcome. The MC for the evening will be Susan Millar DuMars. For further details phone 087-6431748.

Over The Edge acknowledges the ongoing generous financial support of Galway City Council, Poetry Ireland, & The Arts Council.
Over The Edge Literary Events at 8:42 AM
‹
›
Home
View web version