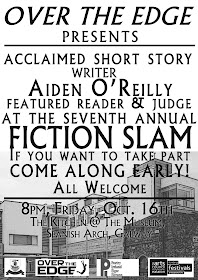 After the event’s huge success in the past six years, Over The Edge presents its seventh annual fiction slam with Featured Reader, Aiden O’Reilly, at The Kitchen @ The Museum, Spanish, Galway on Friday, October 16th, 8pm.


Aiden O’Reilly’s short story collection Greetings, Hero was published by Honest Publishing UK in 2014, and launched in London and in Dublin. Aiden lived for nine years in Eastern Europe. He has worked as a mathematics lecturer, translator, building-site worker, and sub-editor for a property magazine. His fiction has appeared in The Stinging Fly, The Dublin Review, The Irish Times, Prairie Schooner, 3am magazine, Unthology 4 and in several other anthologies. His plays have been given professional staged readings at The Triskel in Cork, and in Dublin. He won the biannual McLaverty Short Story Award in 2008. In 2012 he received a bursary from the Arts Council.


The first twelve fiction writers to make it to The Kitchen @ The Museum on the evening of Friday, October 16th and register will be guaranteed a place in the slam. If you want to be sure of a place, get there early! All participating writers should bring two pieces of their own fiction, as there are two rounds. The time limit in both rounds is five minutes. Extracts from longer stories are admissible. Stories do not have to be memorised. The Fiction Slam will be judged by a three person jury made up of two audience members and Aiden O’Reilly. Three writers will go through to the second round and the prize for the winner is a bottle of wine.

Over The Edge acknowledges the ongoing generous financial support of the Arts Council, Poetry Ireland and Galway City Council.
Over The Edge Literary Events at 8:34 PM

September Over The Edge: Open Reading with Katherine Noone, Andrea Lutz, & Rafiq Kathwari

The September ‘Over The Edge: Open Reading’ takes place in Galway City Library on Thursday, September 24th, 6.30-8.00pm. The Featured Readers are Rafiq Kathwari, Andrea Lutz, & Katherine Noone. The evening will also see the announcement of the shortlist for this year’s Over The Edge New Writer of the Year competition, judged by poet, fiction writer, and literary activist Dave Lordan.

Katherine Noone’s poems  have  appeared  in  Boyne  Berries, Crannóg, The  Galway Review, Linnets Wings, Orbis , Skylight 47. She was shortlisted  for the Vallum (Canada) poetry competition in 2012 and Poem  for  Patience 2015. She attends Kevin Higgins advanced poetry workshop in Galway.


Andrea Lutz was born in Germany, where she worked as a teacher before moving to Ireland in 2012. She has published articles and short stories in the online magazine thecheers.org. One of these articles was selected for publication in a Danish school book. Andrea founded the writing group Galway International Writers, which is now in the process of compiling an ebook. Andrea’s short fiction has been published in The Galway Review; her first published poem appeared early this summer in Silver Apples Magazine. 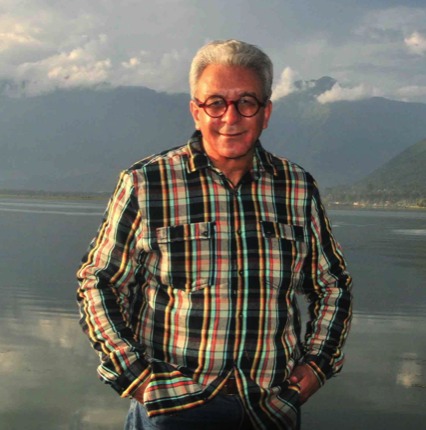 Rafiq Kathwari is the first non-Irish recipient of the Patrick Kavanagh Poetry Award, in the 44-year history of the award. He lives in Ballyoonan, County Louth. He has lived most of his adult life in New York, but was born, as he puts it, “a Scorpio at midnight” in the disputed Kashmir Valley, where he has been working for many years as a social entrepreneur, empowering women artisans. Rafiq has translated from the original Urdu selected poems of Sir Mohammed Iqbal, one of the handful of great South Asian poets of the 20th century writing in Urdu. He divides his time between New York, Dublin and Kashmir. Rafiq’s debut poetry collection, In Another Country, is just published by Doire Press.

Over The Edge acknowledges the ongoing generous financial support of Galway City Council, Poetry Ireland, & The Arts Council.
Over The Edge Literary Events at 10:32 PM 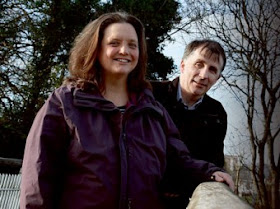 
Creative Writing for Beginners with Kevin Higgins takes place one evening per week (Monday) from 7-9pm (10 weeks) with a mid-term break. It commences on Monday, September 28th, 2015. Advance booking is essential. Places cost €120. Kevin Higgins will provide writing exercises for, and give gentle critical feedback to, those interested in trying their hand at writing stories, poems, or memoir.

Intermediate Creative Writing with Susan Millar DuMars takes place one evening per week (Tuesday) from 7-9pm (10 weeks). It commences on Tuesday, September 29th, 2015. Advance booking is essential. Places cost €120. This class is suitable for those who’ve participated in creative writing classes before or begun to have work published in magazines. Flexible exercises and work-shopping of assignments, together with the study of the works of published writers, will help each class member to find their own writing voice.

YOU CAN ALSO BOOK in person
at Galway Technical Institute,
when it re-opens after the summer holidays.
Monday-Friday, (10am-4.30pm). 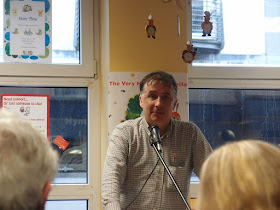 Starting in September, Galway Arts Centre is offering aspiring poets a choice of three poetry workshops, all facilitated by poet Kevin Higgins, whose best-selling first collection, The Boy With No Face, published by Salmon Poetry, was short-listed for the 2006 Strong Award for Best First Collection by an Irish poet. Kevin’s second collection of poems, Time Gentlemen, Please, was published in 2008 by Salmon Poetry and his poetry is discussed in The Cambridge Introduction to Modern Irish Poetry. His third collection Frightening New Furniture was published in 2010 by Salmon. His work also appears in the generation defining anthology Identity Parade –New British and Irish Poets (Ed. Roddy Lumsden, Bloodaxe, 2010) and The Hundred Years’ War: modern war poems (Ed Neil Astley, Bloodaxe April 2014).  A collection of Kevin’s essays and book reviews, Mentioning The War, was published by Salmon Poetry in 2012. Kevin’s poetry has been translated into Greek, Russian, Spanish, Italian, Japanese & Portuguese. His fourth collection of poetry, The Ghost in the Lobby, was published last year by Salmon. Kevin's poetry was the subject of a paper 'The Case of Kevin Higgins, or, The Present State of Irish Poetic Satire' presented by David Wheatley at a Symposium on Satire at the University of Aberdeen.

Kevin is an experienced workshop facilitator and several of his students have gone on to achieve publication success. One of his workshop participants at Galway Arts Centre won the prestigious Hennessy Award for New Irish Poetry, two have won the Cúirt New Writing Prize, and yet another the Cúirt Poetry Grand Slam, while several have published collections of their poems; two being shortlisted for the Shine-Strong Award for Best First Collection of poems. In 2013 a group of his students set up the poetry newspaper Skylight 47, which publishes new poems, reviews of poetry books and opinion pieces about poetry related matters. Kevin teaches poetry on the NUI Galway Summer School programme and mentors poetry students on the NUIG BA Creative Writing Connect programme. Kevin is also co-organiser of the successful Over The Edge reading series which specialises in promoting new writers.

The Tuesday evening and Friday afternoon workshops are open to both complete beginners as well as those who’ve been writing for some time. The Thursday afternoon workshop is an Advanced Poetry Workshop, suitable for those who’ve participated in poetry workshops before or had poems published in magazines. The cost to participants is €110, with an €100 concession rate.

Places must be paid for in advance. To reserve a place contact reception at Galway Arts Centre, 47 Dominick Street, phone 091 565886 or email info@galwayartscentre.ie
Over The Edge Literary Events at 11:29 PM 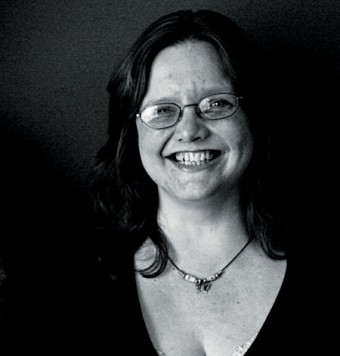 Starting in September, Galway Arts Centre presents a daytime class for all those beginner and continuing creative writing students out there, facilitated by Susan Millar DuMars. Susan Millar DuMars writes both poetry and fiction. A collection of her stories, Lights In The Distance, was published in December 2010 by Doire Press; she has published three collections of poetry, Big Pink Umbrella (2008), Dreams For Breakfast (2010) & The God Thing (2013) all with Salmon Poetry. Susan is the Featured Fiction writer in the current issue of the American online magazine The Atticus Review. She is also co-organiser of the Over The Edge reading series which specifically promotes new writers. Susan edited the anthology Over the Edge – the first ten years, published by Salmon, which includes work by forty seven writers who have published a first book since they did a reading at an Over The Edge: Open Reading in Galway City Library.

The class is suitable for both beginning and continuing creative writing students, working in either poetry or fiction. Students will spend their weeks responding to writing exercises designed to inspire, rather than inhibit. In class, they will receive gentle feedback on their work from their classmates and from the teacher. The class takes place on Monday afternoons, 2.30-4pm, commencing on Monday, September 21st. It runs for 10 weeks.

The cost to participants is 110 Euro with an 100 Euro concession price. Booking is essential as places are limited. There are no refunds once the class has started. For booking please contact Galway Arts Centre, 47 Dominick Street, phone 091 565886 or email info@galwayartscentre.ie
Over The Edge Literary Events at 11:29 PM
‹
›
Home
View web version