NEWSFLASH Salmon Poetry To Publish Over The Edge Competition Winner 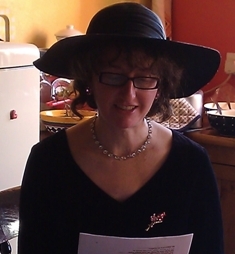 Nicola Griffin
Nicola Griffin won the poetry section in the 2010 Over The Edge New Writer of The Year competition. Part of Nicola's prize was that Salmon Poetry would read a manuscript submitted to them by her. We are delighted to announce that Salmon Poetry has now accepted for publication Nicola's first collection of poems. The publication of her or his first book of poems is a huge moment in any poet's writing life. We are delighted that Nicola's entry into our competition has led directly to this major breakthrough for her as a poet.

Salmon Poetry will read, with no commitment to publish, a manuscript submitted to them by the winner of the poetry section in the 2011 Over The Edge New Writer of The Year competition. For details on how to enter this year's competition see http://overtheedgeliteraryevents.blogspot.com/2011/02/2011-over-edge-new-writer-of-year.html
Over The Edge Literary Events at 7:30 PM

North Beach Publications and Doire Press invites you to the launch of North Beach Nights: Anthology One, featuring Sarah Clancy, Mark James & Mikey McCrory, with a forward by Billy Ramsell.

Billy Ramsell was born in Cork in 1977 and educated at the North Monastery and UCC. Complicated Pleasures, his first collection, was published by the Dedalus Press, Dublin, in 2007. He has been shortlisted for a Hennessy award and a Strong award. He has been invited to read his work at many festivals around the world; most recently in Shanghai and in San Francisco. He lives in Cork where he co-runs an educational publishing company

Poets wishing to enter the June Slam should have 2 max. 3 minute poems. The poem for the 2nd round must be performed without a script.

You are invited to join the Galway Night of Eco Poetry - to be held at Ard Bia at Nimmos, 8 p.m. on Saturday 11th of June. There will be two featured poets, Tom Duddy and Sabine Lenore Mueller, reading a selection of their works, followed by an open mike session to share and enjoy poetry with nature at heart. Join in and let your voice be heard!

With this night of poetry we will celebrate the closing of our conference "From Ego to Eco - Imagining Ecocentrism in Literature, Film, and Philosophy" hosted by the School of Languages, Literatures and Cultures at NUIG – All are welcome!

If you are interested in taking part, please sent an email to ecopoetrygalway@hotmail.com and let us know how many/which pieces you would like to perform!
Over The Edge Literary Events at 11:48 PM

May 'Over The Edge: Open Reading' with Rita Ann Higgins, Angela Carr & 2010 Over The Edge New Writer of The Year, Seamus Scanlon 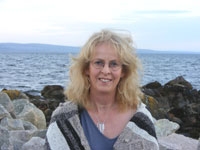 The May Over The Edge: Open Reading takes place in Galway City Library, St. Augustine Street, Galway on Thursday, May 26th, 6.30-8pm. The Featured Readers are Seamus Scanlon, Angela Carr & Rita Ann Higgins. The reading is also one of series of events which will mark Galway for Japan Day. Galway for Japan Day gives the people of Galway an opportunity to express their solidarity with the victims of the recent earthquake in the Tohuku province of Japan. Yoshimi Hayakawa of The Wa Café will read a poem at the open-mic on the evening to mark the day.

Seamus Scanlon is a native of Galway and currently living in New York. He has an MFA in Creative Writing from City College New York where he won numerous awards for fiction and drama. He was a runner up in 2010 Fish Publishing One Page competition and the winner in 2011 and was short-listed for the 2009 New Irish Writing Awards. He also won a prestigious Carnegie Corporation/New York Times award for librarianship in Dec 2009 with prize money of $5,000. His first ever reading was at the Over The Edge open-mic in Galway City Library in early 2004. Last September, Seamus was chosen by competition judge, James Martyn, as 2010 Over The Edge New Writer of The Year for his story ‘The Butterfly Love Song’. This reading is part of Seamus’s prize for winning the Over The Edge competition. He also received a cash prize of €700.

Angela T Carr hails from Glasgow, via Donegal, and has lived and worked in Dublin since 1999. She began writing poetry in 2007 and since then her work has been short-listed for the Single Poem award at Listowel Writers Week 2008, published in the Fish Anthology 2009, Commended in the Francis Ledwidge International Poetry Award 2010 and Highly Commended in the Over the Edge - New Writer of the Year 2010. She is a member of the Words on the Wind poetry group, at the Irish Writers Centre in Dublin, and excerpts from her poems were published on the streets of Dublin, as part of the Upstart initiative during the General Election campaign.

Rita Ann Higgins was born in 1955 in Galway, Ireland. She divides her time between Galway City and Spiddal, County Galway. Her first five collections of poetry were published by Salmon: Goddess on the Mervue Bus (1986); Witch In The Bushes 1988); Goddess and Witch (1990); Philomena’s Revenge (1992); and, Higher Purchase (1996). Bloodaxe Books published her next three collections: Sunny Side Plucked (1996); An Awful Racket (2001); and Throw in the Vowels: New & Selected Poems in May 2005 to mark her 50th birthday. Her plays include: Face Licker Come Home (Salmon 1991); God of the Hatch Man (1992), Colie Lally Doesn't Live in a Bucket (1993); and Down All the Roundabouts (1999). In 2004, she wrote a screenplay entitled The Big Break. In 2008 she wrote a play, The Empty Frame, inspired by Hanna Greally, and in 2008 a play for radio, The Plastic Bag. Her collection Sunny Side Plucked was a Poetry Book Society Recommendation. She is a member of Aosdána. Her most recent book Hurting God – Part Essay Part Rhyme was published last year by Salmon.

There will be an open-mic when the Featured Readers have finished. This is open to anyone who has a poem or story to share. New readers are always especially welcome. The MC for the evening will be Susan Millar DuMars. For further details phone 087-6431748.

Over The Edge acknowledges the ongoing generous financial support of Galway City Council and The Arts Council http://overtheedgeliteraryevents.blogspot.com
Over The Edge Literary Events at 9:30 PM
‹
›
Home
View web version