Over The Edge celebrates its eighth birthday with readings by Michael Coady, Sarah Griffin & Dani Gill 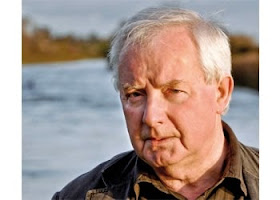 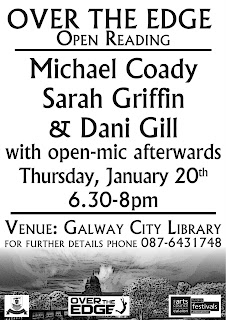 Sarah Maria Griffin is 22 years old and hails from the north side suburbs of Dublin. She is a student on the M.A in Writing at NUI Galway. She has only been performing in spoken word circles since late 2009, but since then has performed at many events such as The Glor Sessions, Exchange Words & The BrownBread Mixtape. She is also the co-founder of the diary-reading event in Dublin, Scarleh Fer Yer Ma Fer Havin Ya. Sarah writes both poetry and fiction and last October won the annual Over The Edge fiction slam.

Dani Gill is originally from Longford. For the past number of years she has worked in the Arts in Galway and has a background in theatre and Arts journalism. In October 2010 she was appointed Literature Officer for the Galway Arts Centre and Programme Director of Cúirt International Festival of Literature. She began creative writing classes with the lovely Susan Millar DuMars in early 2009 and was long listed in the 2010 Over The Edge New Writer of The Year competition. This will be Dani’s first public reading.

Michael Coady was born in 1939 in Carrick-on-Suir, County Tipperary, where he has worked as a teacher, musician and writer. Winner of the Patrick Kavanagh Award for Poetry in 1979 and also of Listowel Writers’ Week and RTE Francis McManus short story awards, he has published five collections with The Gallery Press: Two for a Woman, Three for a Man (1980), Oven Lane (1987), All Souls (1997), One Another (2003) and Going by Water (2009). In 2004 he received the eighth annual Lawrence O'Shaughnessy Award for Poetry from the University of St Thomas Centre for Irish Studies, St Paul, Minnesota. Michael was Heimbold Professor of Irish Studies at Villanova University in 2005. He is a member of Aosdána.

Over The Edge acknowledges the ongoing generous financial support of Galway City Council & The Arts Council.
Over The Edge Literary Events at 2:26 PM 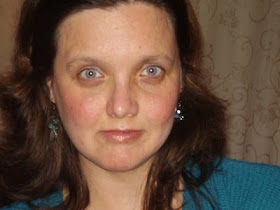 Susan Millar DuMars will give support, instruction and feedback to students who are interested in writing either fiction (short stories, novels) or poetry. The course takes place one evening per week (Wednesday) for 7 weeks from 7–9 p.m. The course commences on Wednesday, February 9th. Advance booking is essential. Places cost €95.00. For further details or to book a place contact GMIT, Dublin Road, Galway. Telephone 091-742145 or see http://www.gmit.ie/lifelong-learning/lifelong-learning-programmes/general-interest/artistic-creative/creative-writing-beginners.html


Susan was born in Philadelphia in 1966 to a Belfast-born mother. She holds an MA in Writing from the University of San Francisco. Her poems and short stories have been published widely in the US, UK and Ireland. Susan's stories have been short-listed for many awards, and in 2005 she received an Irish Arts Council Bursary for her fiction. American Girls, a volume of her short stories, was published by Lapwing in 2007. Since 2003, Susan and her husband Kevin Higgins have organised the successful Over the Edge reading series, showcasing new writers. Susan teaches creative writing at Galway Technical Institute, Galway Arts Centre, Galway Mayo Institute of Technology and on the Brothers of Charity Away With Words programme. Big Pink Umbrella (Salmon Poetry, 2008) was the first full collection of her poetry. One of her poems has been chosen by editor, Mathew Sweeney, for inclusion in Best of Irish Poetry 2010 (Southword Editions). Several of her poems feature in Landing Places: Immigrant Poets in Ireland, edited by Eva Bourke (Dedalus Press, March 2010). Her second collection of poems, Dreams for Breakfast, was published this April by Salmon Poetry. Her first full collection of short stories, Lights In The Distance, is published this December by Doire Press.
Over The Edge Literary Events at 1:13 AM

The next Poetry Slam with MC Pete Mullineaux will take place Tuesday January 18th at 7pm at the Galway Arts Centre.

Anyone can participate on the night and new comers are very welcome. To participate you need one poem/piece that will take about 3 minutes to perform. Judges on the night will select their favorite and the winner will be invited to be a guest reader at the next slam as well as qualifying for the Cúirt Grand Slam which will take place during next year’s Cúirt International Festival of Literature 12-17 April 2011.

In addition to this, the winner’s poem will be published on the Galway Arts Centre website along with a biography of the contestant. There will also be an interactive words game on the night with a Charlie Byrne’s Bookshop voucher up for grabs. Kevin Higgins will be the guest reader this month.The evening is free and all are welcome.
Over The Edge Literary Events at 12:17 AM

Modern Ireland has Nothing to Inspire Modern Writing

On Wednesday 2nd February the Irish Writers' Centre presents an open panel discussion on how the current economic climate is affecting modern writing in Ireland. Panellists from many areas across the Arts Sector will join together under one roof to discuss the impending budget and its possible effect on modern and aspiring writers as well as the dwindling number of arts organisations across the country.

The discussion will begin at 7pm and is open to the general public.

The Irish Writers’ Centre is a non-profit organisation run by volunteers that promotes contemporary Irish literature. Since its foundation in 1991, the Centre has welcomed many award-winning writers through its doors, including Nobel, Costa, Man Booker, IMPAC, and Pulitzer Prize winners. It has also served as an important platform for breakthrough talent, with many young writers giving their first public readings here.
--
Irish Writers' Centre
19 Parnell Square
Dublin 1
t: +353 (0)1 872 1302
e: info@writerscentre.ie
w: http://www.writerscentre.ie
Over The Edge Literary Events at 12:05 AM 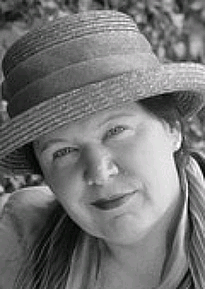 Meta Kušar
On Wednesday 19th January the poet Yvonne Cullen will be in Ballybane Library at 2.30 pm to present some Slovenian poetry in translation.
The Slovenian poet Meta Kušar has written: “I hear a soul crying poignantly outside the door, wanting to come in.”

What world is it that the poetry of Meta Kušar and other Slovenian poets communicates? Meta Kušar writes about the self-regenerating power of life.

Yvonne Cullen promises a very interesting 40 minutes of the poetry of Slovenia.
Please join us!
Over The Edge Literary Events at 12:02 AM 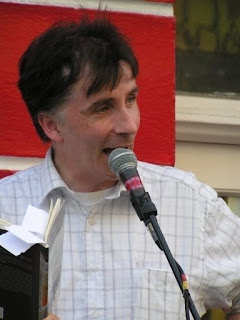 In the New Year Galway Arts Centre is offering aspiring poets a choice of three poetry workshops, all facilitated by poet Kevin Higgins, whose best-selling first collection, The Boy With No Face, published by Salmon Poetry, was short-listed for the 2006 Strong Award for Best First Collection by an Irish poet. Kevin’s second collection of poems, Time Gentlemen, Please, was published in 2008 by Salmon Poetry and his poetry is discussed in the Cambridge Introduction to Modern Irish Poetry. His third collection Frightening New Furniture was published in April by Salmon and his work also appears in the generation defining anthology Identity Parade –New British and Irish Poets (Ed. Roddy Lumsden, Bloodaxe, 2010).

Kevin is an experienced workshop facilitator and several of his students have gone on to achieve publication success. One of his workshop participants at Galway Arts Centre won the prestigious Hennessy Award for New Irish Poetry, while several have published collections of their poems. Kevin is also co-organiser of the successful Over The Edge reading series which specialises in promoting new writers.

The Tuesday evening and Friday afternoon workshops are open to both complete beginners as well as those who’ve been writing for some time. The Thursday afternoon workshop is an Advanced Poetry Workshop, suitable for those who’ve participated in poetry workshops before or had poems published in magazines. The cost to participants is €110, with an €100 concession rate.

Places must be paid for in advance. To reserve a place contact Victoria at reception at Galway Arts Centre, 47 Dominick Street, phone 091 565886 or email victoria@galwayartscentre.ie
Over The Edge Literary Events at 1:23 AM

In the New Year Galway Arts Centre presents a daytime class for all those beginner and continuing creative writing students out there, both facilitated by Susan Millar DuMars. Susan Millar DuMars writes both poetry and fiction. A collection of her stories, Lights In The Distance, is just published by Doire Press; she has published two collection of poetry, Big Pink Umbrella (2008) and Dreams For Breakfast both with Salmon Poetry. She is also co-organiser of the Over The Edge reading series which specifically promotes new writers.

The class is suitable for both beginning and continuing creative writing students, working in either poetry or fiction. Students will spend their week responding to writing exercises designed to inspire, rather than inhibit. In class, they will receive gentle feedback on their work from their classmates and from the teacher. The class takes place on Monday afternoons, 2-3.30pm, commencing on Monday January 17th and runs for ten weeks.

The cost to participants is 110 Euro with an 100 Euro concession price. Booking is essential as places are limited. For booking please contact Galway Arts Centre, 47 Dominick Street, phone 091 565886 or email victoria@galwayartscentre.ie
Over The Edge Literary Events at 1:02 AM


Prize: €500 cash prize and an opportunity to read at the Cúirt 2011 Over The Edge showcase reading


* We will only consider entries from writers who have not had a collection of their work published or do not currently have a collection under consideration for publication.


An entry fee of €10 is applicable for each entry. This must be a postal order or a bank draft made out to Cúirt International Festival of Literature.


* You must submit 3 copies of your work.
* Entries in both the Irish and English language are welcome.
* In addition to your work we ask that you include the following contact details on a separate sheet: Name, email address, phone number. Please do not type your name on each page you submit as we judge the entries anonymously.
* You may include a short biography of yourself if you so wish. If you do so please do not staple or attach it to your work; place it at the back of the envelope; separate to your work.

2011 Arts Council Funding For Over The Edge

Over The Edge is delighted to announce that we have just this morning been informed that we will retain the same level of funding for 2011, under the Arts Council's Small Festivals and Events Scheme, as we received in 2010. In the circumstances this is a great result﻿. Over The Edge has an exciting programme of events lined up for the coming year, which includes readings by Michael Coady, Claire Kilroy, Miriam Gamble, Rita Ann Higgins & Clare Pollard as well as the 2011 Cúirt Over The Edge Showcase reading.
Over The Edge Literary Events at 8:30 AM

The Slam with MC Pete Mullineaux takes place the third Tuesday of every month with winners earning a place in the popular Cúirt Grand Slam event next April.

Anyone can participate on the night and new comers are very welcome. To participate you need one poem/piece that will take about 3 minutes to perform. Judges on the night will select their favourite and the winner will be invited to be a guest reader at the next slam as well as qualifying for the Cúirt Grand Slam which will take place during next year’s Cúirt International Festival of Literature 12-17 April 2011. In addition to this, the winner’s poem will be published on the Galway Arts Centre website along with a biography of the contestant.

There will also be an interactive words game on the night with a Charlie Byrne’s Bookshop voucher up for grabs.

Admission is free, mulled wine and mince pies will be provided. All are welcome.
Over The Edge Literary Events at 1:48 AM
‹
›
Home
View web version