Galway Technical Institute is offering a course in Creative Writing for Beginners with Kevin Higgins. The course takes place one evening per week (Monday) from 7.00-9.30pm for six weeks, commencing on Monday, 16th April. Advance booking is essential. Places cost €75. Kevin Higgins will provide writing exercises for, and give gentle critical feedback to, those interested in trying their hand at writing poems, stories or memoir.

Also on offer is a course in Intermediate Creative Writing with Susan Millar DuMars. This takes place one evening per week (Tuesday) from 7.30-9.30pm for eight weeks. It commences on Tuesday, April 17th. Advance booking is essential. Places cost €80. The course is for those who have an interest in writing stories or poems, and want the guidance and discipline of a weekly class to help them improve. Flexible exercises and work-shopping of assignments, together with the study of the works of published writers, will help each class member to find their own writing voice.

Michael Gorman to read at Over The Edge: Open Reading

Michael Gorman was born in Sligo and educated at Summerhill College and University College Galway. His poetry collections include Postcards from Galway, Waiting for the Sky to fall and Up She Flew. One of his poems, The People I Grew Up With Were Afraid, was chosen by Pauline McLynn for inclusion in the anthology, Voices and Poetry of Ireland. He teaches poetry on the MA in Writing at NUI Galway. Michael Gorman is a hugely charismatic reader of his work; his readings are everything a good poetry reading should be.

Sean Donegan has published poems in Poetry Ireland Review, Time Haiku and the anthology, The Backyards of Heaven. A selection of his haiku will appear in an anthology to be published by Pillar Press, Kilkenny next year. He is a member of The Dark Gate Writers Group.

Margaret Cullagh is originally from Tipperary, but currently lives in Galway. She is the facilitator of The Dark Gate Writers Group. She is a writer and creative writing tutor and has read her work at both the Westside Arts Festival and the Project 06 Festival.

Bernadette Tierney is a Galway native. She was a volunteer worker for many years with the Simon Community. Her poems have appeared in Riposte. She is a member of The Dark Gate Writers Group.

Donal Grehan is originally from Mountmellick in Co. Laois and has been living in Galway for 20years. He writes poetry and short stories. His poems have been published in Bealtaine. He is a member of The Dark Gate Writers Group.

As usual there will be an open-mic when the Featured Readers have finished. This is open to anyone who has a poem or story to share. New readers are always especially welcome. The MC for the evening will be Susan Millar DuMars. For further details contact 087-6431748.
Over The Edge Literary Events at 7:26 PM

The reading was recorded by the Seamus Heaney Centre at Queen's University, which is creating a digital archive of poetry readings. 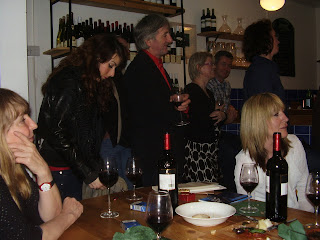 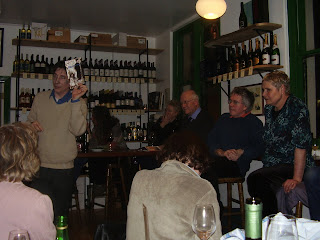 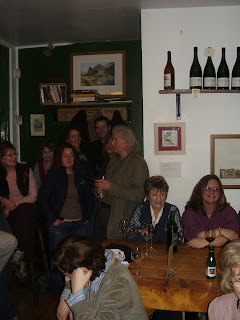 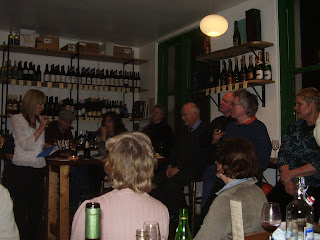 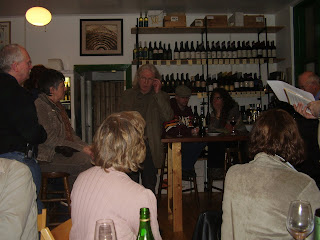 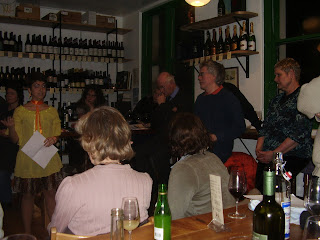 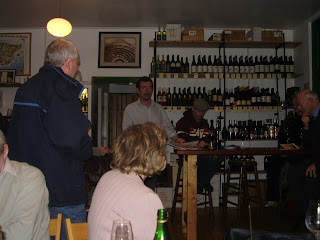 Over The Edge Literary Events at 1:21 AM 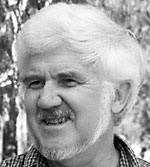 Over The Edge presents a reading by Australian poet, Geoff Page, at Sheridan’s Wine Bar, 14-16 Church Yard Street, Galway on Friday, March 23rd, 8pm. He will read alongside a trio of Galway based writers Stephen Shields, John O’Regan & Brendan McNally.

Geoff Page is an Australian poet who has published seventeen collections of poetry as well as two novels, three verse novels and several other works including anthologies, translations and a biography of the jazz musician, Bernie McGann. He has won several awards, including the Queensland Premier’s Prize for Poetry. His work has been translated into Chinese, German, Serbian, Slovenian and Greek. He has read his work in Switzerland, Germany, Norway, Sweden, Britain, Italy, Serbia, Slovenia, Austria, Hungary, Singapore, China, Korea, the United States, New Zealand and is delighted to be coming to Galway.

Stephen Shields writes poetry and prose. His poems have been published in Crannog, West 47, The Cuirt Annual and he has poems forthcoming in The Shop and Agenda. He has had stories published in Turbulence: A Corrib Anthology and Splinters, the journal of The Bill Naughton Short Story Competition. He was also shortlisted for the Cloch Poetry Competition 2006. He was a featured reader at an Over The Edge: Open Reading in Galway City Library in August 2004.

John O’Regan was born in Waterford, where he was artist in residence at Garter Lane Arts Centre. He worked in journalism before turning to writing fiction and drama. He has had four plays staged in Galway, The Gallery, Cold Storage, The Painting Lesson and Septuagenarians. His fiction has been published in The Stinging Fly, West 47 and The Cuirt Annual. He was a featured reader at an Over The Edge: Open Reading in Galway City Library in September 2003.

Brendan McNally hails from Monaghan but has lived in Galway for many years. His wry and witty stories are often based on his experience of growing up in a border county during the sixties and seventies. He has had a number of his short stores published in magazines and was a featured reader at an Over the Edge: Open Reading in Galway City Library in August 2003.

Over The Edge acknowledges the financial support of the Arts Council and Galway City Council.

Over The Edge Literary Events at 1:21 AM

Thursday, 15th March at THE NEW TIME of 8pm in BK's Winebar.

Máighréad Medbh was born in Newcastle West, County Limerick. Since the publication of her first collection, 'The Making of a Pagan' (Blackstaff Press), in 1990, she has become widely known as a performance poet. The voice in Máighréad's poetry is consciously channeled via the body, whose senses and rhythms are the originators and interpreters of concepts. She has performed at many venues in Ireland, Great Britain and the United States, and also on the broadcast media. Máighréad's other collections are: 'Tenant' (Salmon Publishing 1999) and 'Divas' (Arlen House, June 2003). Poems have also been included in a wide range of anthologies and journals. A commissioned text for children, set to music, is to be broadcast by Lyric FM early in 2007. A new poetry collection is also in the pipeline for 2007.

MC for the evening is TRISH CASEY.

The North Beach Poetry Nights' Slam follows the usual format. Readers / performers / poets wishing to participate are asked to bring along two 3 minute original pieces. Newcomers are particularly welcome. Juries will be selected on the night from the audience.The prize is the honour and a bottle of wine generously donated by BK's.

North Beach Nights gratefully acknowledges the support of Poetry Ireland and Galway City Council for this event.
Over The Edge Literary Events at 10:23 AM 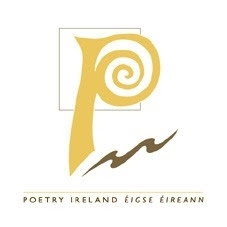 Moyra Donaldson was born in Newtownards and educated at Queen’s University. Three collections of her poems have been published by Lagan Press, Snakeskin Stilettos (1998), Breaking the Ice (2001) and The Horse’s Nest (2006). Snakeskin Stilettos was reprinted in 2002 by CavanKerry Press, New Jersey, and shortlisted for the ForeWord Book of the Year Award.

Martin Mooney lives in Co. Antrim. He has published three acclaimed collections of poetry: Grub, winner of the 1994 Brendan Behan Memorial Award (Blackstaff 1993, reissued in the USA by Cavankerry in 2002), Rasputin and his children (Blackwater 2000, reissued by Lagan in 2003), and Blue Lamp Disco (Lagan 2004).

John Walsh is originally from Derry, but has lived in Galway for some years now. His first collection of poems, Johnny Tell Them, was published by Guildhall Press in December. He is the organiser of the popular North Beach Poetry Nights.

Over The Edge acknowledges the financial support of the Arts Council, Poetry Ireland and Galway City Council.
Over The Edge Literary Events at 1:26 AM
‹
›
Home
View web version