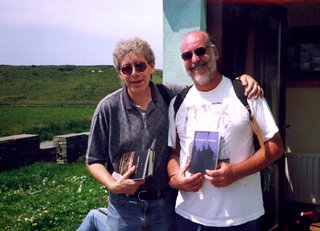 Eamonn Wall with fellow Salmon poet, John Meneghan who read at Sheridan's Wine Bar in May

Eamonn Wall, born and raised in Co. Wexford, has lived in the US since 1982 and is now settled in Missouri. His poetry collections are Dyckman--200th Street (1994), Iron Mountain Road (1997), The Crosses (2000), and Refuge at Desoto Bend (2004) all published by Salmon. From the Sin-é Café to the Black Hills (2000), a volume of essays on the Irish Diaspora, received the Michael J. Durkan Prize from the American Conference for Irish Studies for excellence in scholarship. Eamonn Wall teaches at the University of Missouri-St. Louis.

Moya Cannon was born in Dunfanaghy, Co. Donegal in 1956 and now lives in Galway. She has published two collections of poems, Oar, (Salmon Press, Galway,1990; Poolbeg Press, Dublin, 1994; Gallery Press, Meath, 2000) and The Parchment Boat (Gallery Press, 1997). A third collection, Carying the Songs will be published by Carcanet Press in 2007. She has been an editor of Poetry Ireland Review and writer-in-residence at Trent University, Ontario and at the Centre Culturel Irlandais, Paris. A recipient of the Brendan Behan Award and of the Lawrence O Shaughnessy Award, she was elected to Aosdana in 2004.

Michael Heffernan lives in Fayetteville, Arkansas, where he teaches poetry at the University of Arkansas. His seven books include The Back Road to Arcadia and Another Part of the Island from Salmon Publishing, and The Night Breeze Off the Ocean, published last year by Eastern Washington University Press. He has received three grants in poetry from the National Endowment for the Arts (US). His long acquaintance with Galway involved several years of association with NUIG’s International Writers Course, which he founded in 1989.

Catherine Hunter is a poet and novelist who teaches English and Creative Writing at the University of Winnipeg in Canada. Her books include the thriller The Dead of Midnight and the poetry collection Latent Heat, which won the "book of the year" award in her home province of Manitoba.This will be her first visit to Ireland.

There is no entrance fee. All welcome. For further information contact Kevin Higgins on 087-6431748.
Over The Edge Literary Events at 1:35 PM
‹
›
Home
View web version